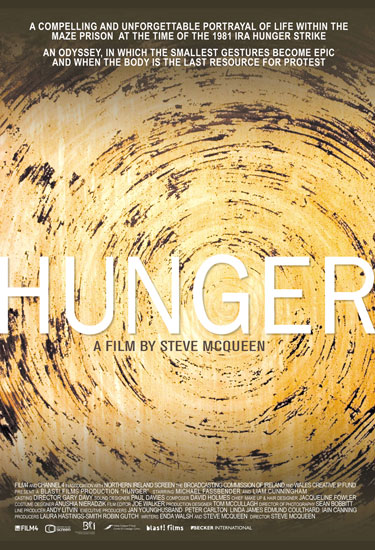 Steve McQueen’s directorial debut is a triumphant first picture that has such sure of itself directing and acting it is a great start to a promising career told through a remarkable tale of political sacrifice.
The film is based on events surrounding the hunger strike of Bobby Sands in protest of Ireland’s ongoing struggles with British government. The film is contained almost entirely to the prison all of these IRA prisoners are being held in and we get a look into their lives of non-conformity as well as a look at the life of a particular guard. In fact Bobby Sands doesn’t show up until half way through the film, but he will captivate you every moment on screen.
While we wait for Sands to show up, the film is just as compelling as we follow the path of a new prisoner who demands he be treated to the terms of “The Five Demands”, an prison guard enforcer who fears for his life every step outside of the prison, the cell life of a pair of inmates as they smuggle contraband, smear their feces along the walls, and live without beds in protest. The film captures the intensity of the prison with such ease and in such interesting ways; the director’s vision is incredible for a rookie director. Some might complain the film lingers too long, but I think the films setting of prison and the long dull hours of life on the inside compliment the film well, and McQueen never leaves a lingering shot without a dull image or something interesting going on. Simple and affective, I can’t wait to see what he does yet and with a budget.
McQueen’s ability to invoke moods and tension through simple mechanisms is equally impressive and he will get your blood going on more than one occasion. McQueen also tells us so much with so little, sometimes even no words at all. Giving us full realizations of a minor character in a brief sequence with little more than the actor’s facial work and an establishing shot here and there, it is remarkable.
McQueen also gets incredible work out of his actors, starting with Michael Fassbender as Bobby Sands. From the physical endurance of the role to the expressing the man’s mind through words, Fassbender is remarkable and lets hope between this and Inglourious Basterds that he is on his way to bigger things. Liam Cunningham also deserves notice for going toe to toe with Fassbender in an absolutely amazing display of acting in a single take sequence of dialogue between Sands and a priest (Cunningham). The two seem so natural and speak so eloquently, it is a real marvel to watch, even if it might have carried on a tad to long. Stuart Graham who plays the main guard is also riveting on screen and quite great at creating this dual persona and conveying his feelings of not quite being down with his job with only his face to express it most of the time. The rest of the cast is almost courageous as Fassbender working with some disturbing and intense material and conveying so much with so little dialogue, there is nary a weak link in the group.
In the end, Hunger is one of the finest films to be released in the last year and will not be an experience you forget anytime soon. Based on a disturbing and remarkable true story, Bobby Sands life is engaging even if we only experience the final ones. Hunger has to be one of the finest prison films to ever be release and one of the finest directorial debuts of the decade. This little seen British/Irish gem needs to be seen by a far bigger audience and you should do yourself a favor and seek out this wonderful film about the power of sacrifice and standing up for what you believe in.
Hunger is an A

P.S. This title is currently for free in HD on cable on demand under IFC!