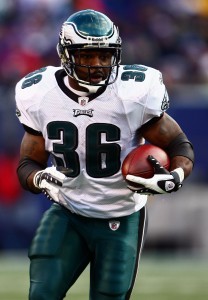 The Eagles released Brian Westbrook yesterday, ending his eight-year career with the team. In those seasons, he rushed for 5,995 yards and caught 426 passes for 3,790 yards. But due to his injuries, and the $7.5 million dollars he was going to receive next year – the team had to make a tough decision.

Yesterday on ESPN Sports Center, Scott Van Pelt was talking about the story and thought he had Westbrook on the phone to interview him about the situation. Instead he got a Howard Stern listener, Captain Janks. On the phone, the faux Westbrook said, “I nothing but respect for head coach Andy Reid and I look forward to a future of worshiping the prostate of Howard Stern.”

Watch the entire prank video below: