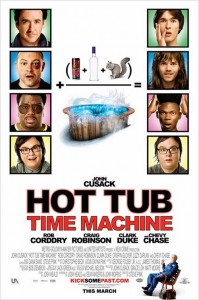 Hot Tub Time Machine is even more silly and absurd than you think and is a lot of fun but is a tad disjointed and random for its own good.

Following a seemingly accidental suicide attempt, a group of friends go back to their old vacation stomping grounds to blow off some steam and reunite after growing far apart into their dull lives.  The town and ski lodge is not what it used to be and after a call in to get their hot tub fixed, a mysterious sparkling new one is installed.  Drunken debauchery begins between the three friends and one their twenty something nephews and after spilling some illegal Russian energy drink on the tubs controls the group is sent back in time to 1986, entering the bodies of their teenage selves that were visiting for Winterfest 86’ that year.  The group then enters into a Back to the Future type plot that has them trying to recreate the night’s events at the risk of derailing their lives and possibly erasing the nephew’s existence.

Now, this film is not to be taken seriously, and if you come into it expecting anything serious than you will be seriously disappointed.  With that said if you are looking for gross out and ridiculous fun this is a solid comedy entry for 2010.  Too all over the place and incoherent to work from top to bottom there are definitely plenty of laugh out loud moments sprinkled through out.  The running bit’s with Crispin Glover’s bizarre bell hop and his arms impending doom, a high stakes bet on a football game, and a botched threesome are the highlights of the picture, with plenty of gross out humor in these scenes.  In fact the stuff in a pair of these sequences is pretty original which is what makes it work so well.  The humor in the film rarely doesn’t work and while there are a lot of decent chuckles compared to belly laughs the fact that it rarely misses is a strong feet for a comedy.

The cast in the film also helps the film to succeed with John Cusack leading the way.  When he gets into his teen angst mode for the second half of the picture I couldn’t help but reminisce on his earlier work in the 80’s.  He also has some great one liners here and there and watching him get blasted out of his mind tickled my funny bone as well.  Craig Robinson is great as the straight man of the group and does just as good a work here as he does in everything he does.  It is nice to see him get a more featured role and I think his stuff will play better at home as a lot of his lines were throwaways drowned out by laughter.  Rob Corddry successfully plays the dick friend of the group and perfectly walks the fine line of being a douche without being annoying almost 95% of the time.  Clark Duke also delivers his best work in a film yet and shows some real promise as a comedy star down the line if he just takes some roles outside his safe look.  Chevy Chase has a couple funny bits as a hot tub repair men and Crispin Glover is great as the insane, soon to be one armed, bell hop.

In the end, Hot Tub Time Machine is exactly what it is selling and lived up to my expectations; silly, stupid, fun.  The cast is solid, the humor almost always works, but it is a bit to random and disjointed to really excel.  Now, a film doesn’t have to have a perfect narrative to work, Wet Hot American Summer is one of the best comedies of the last decade and is completely random, but this film doesn’t come close to the greatness of that picture.  With that said, it is a solid comedy and if you are interested I am sure there is plenty you will find to like in the picture, though don’t expect this to transcend audiences like the Hangover did last summer, even if I think it might be as funny as that film at times.

Hot Tub Time Machine is a B-

P.S. The younger version of Cusack is a dead ringer for Cusack from the 80’s