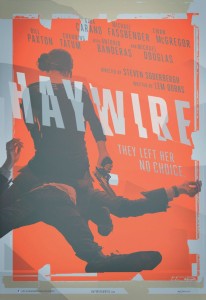 I felt as if my friend was going to punch me in the face after leaving Haywire, and I responded with, “Meh”. It wasn’t as if it is a bad film, it’s just a number of hobbled spy film cliches, and instead of a dashing or dangerous male lead, it has a lethal female lead.

Mallory Kane (Gina Carano) is one of the best at what she does. She is relentless in her pursuit of her targets while working for a private contractor that takes dirty jobs from the government. However, when she leaves her employer and former boyfriend, Kenneth (Ewan McGregor), a plan to set her up for a fall goes awry. Her path takes her halfway across the world, and allows her to tell her plot of revenge in a non-linear fashion.

The story isn’t very robust, but this works for the film. Haywire works best when it is kicking your ass, and Soderbergh uses former MMA fighter Gina Carano and her talents amazingly in the intense fighting scenes.  It all looks slightly choreographed, but its dirty enough to be somewhat believable. If only the rest of the story held as much interest. Much of the dialogue is tedious, and the delivery from newbie actor Carano is a bit wooden at times.

Carano is helped along by a number of solid actors with small parts such as Micheal Douglas, Bill Paxton, Ewan Mcgregor, Antonio Banderas, Michael Fassbender (who once again proves to be among the best in any cast he is put in), and, continually on the rise, Michael Angarano. Channing Tatum also plays a small role in the film, and once again proves that with a competent director behind him he can pull his weight. Nope, Tatum is not the weak link in this cast when it comes to creating his character.

Soderbergh’s talent has long been in getting solid performances from large casts, and a director like this was probably a good choice for Carano’s first film. She doesn’t have to carry all the weight herself in Haywire, and when her dry delivery gets a bit too much, there is usually another actor around the corner to pull a little slack.

I can’t say I was a huge fan of the photography in this film. The constant vignetting used seemed unnecessary, and made what would have been otherwise decent photography, downright cheesy. The dull and muted tones work well, but at times there were some weird framing issues, and things that just looked out of place. I’m still not entirely sure it wasn’t just the theater I viewed it in, so I might hold final judgement until I can see this on a Blu-Ray down the road.

Haywire in the end is an action-thriller that won’t bore you, but won’t excite you enough to remember it a month down the road. For a January release, it is top notch, but if you release this during the summer, it would easily get lost in the crowd. If you’re an action nut, it’s going to be worth your money. If not, wait until the inevitable Netflix release.