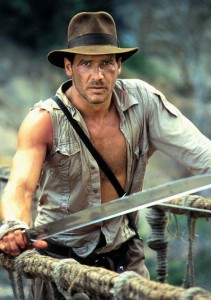 Harrison Ford recently talked to the BBC, and talked about a chance of an upcoming fifth Indiana Jones film. After the last film $786.6 million worldwide, it is no surprise that there might be a sequel in the works.

“Steven and George and I are sort of agreed on a germ of an idea and we’re seeing what comes of it. The process works like this,” he said. “We come to some basic agreement and then George goes away for a long time and works on it. Then Steven and I get it in some form, some embryonic form. Then if we like it we start working with George on it and at some point down the line it’s ready and we do it.”

He didn’t reveal what the plot might be about, or if people like Shia LeBeouf would be reappearing in the sequel. I’m of the opinion that this is a bad idea. The fourth Indiana Jones film was one of the worst films of Spielberg’s career, and it really damaged the brand. I’m not sure if Ford is too old for the role, but he doesn’t seem as convincing in it anymore. I’m kind of hoping this one stays on the shelf.