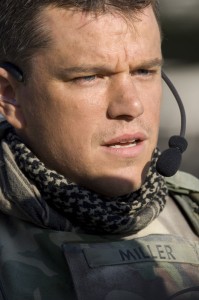 I’m sold! Paul Greengrass working with Matt Damon again? Seems like a dream come true. Greengrass has slowly become my favorite action director with his work on the Bourne series and films like Bloody Sunday. Damon is a standout in just about any role he is in. Add in actors like Brendon Gleeson, Jason Issacs, and Greg Kinear, you have a hit on your hands. The only depressing thing is that we have to wait til March to see this film. Although, I’m sure there will be at least one more major trailer released for it before March, that one will be sure to spoil almost every twist and turn the movie takes. At least you will be able to suppress your anger by watching Matt Damon go all Jason Bourne on someone, without all the constant soul searching.

Chief Warrant Officer Roy Miller (Matt Damon) is certain that Hussein has been stockpiling WMDs in the Iraqi desert, but in their race from one booby-trapped site to the next, they soon stumble across evidence of an elaborate cover up. As a result, the objective of their mission is inverted, and Miller realizes that operatives on both sides of the conflict are attempting to spin the story in their favor. Now, as Miller searches for answers made ever more elusive by covert and faulty intelligence, the truth becomes the most valuable weapon of all. Will those answers prove pivotal in clearing a rogue regime, or escalate the war in a region that grows increasingly unstable with each passing day? Amy Ryan co-stars as the New York Times foreign correspondent who travels to Iraq investigating the U.S. government’s allegations about weapons of mass destruction, with Greg Kinnear appearing in the role of an additional CIA officer, and Antoni Corone essaying the role of a colonel. Brendan Gleeson rounds out the main cast for this Universal Pictures production. ~ Jason Buchanan, All Movie Guide