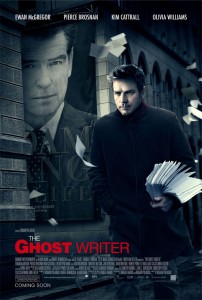 It is hard to separate Roman Polanski the film director, and Roman Polanski the man of scandal. I want to make it clear first, that I am reviewing one of his movies, and I am not condoning any of his actions. I had many reservations going into to this film due to Mr. Polanski’s crimes, but what I found was an intriguing political thriller that resembled a lot of current events.

A ghostwriter is a person who is paid to write for someone else, usually in the form of memoirs of a person of public interest. They serve as the celebrities pen, when the people lack either the time or the skill to make powerful prose. In Ghost Writer, Ewan McGregor plays a ghostwriter who is never mentioned by name, but takes the job of ghostwriting previous UK Prime Minister Adam Lang’s memoirs. The Ghost has one month to do so, and what makes it even harder is that the last Ghost was found dead, washed up on the beach of Martha’s Vinyard. The previous Ghost left a manuscript, everything is there but not in the right words. Through interviews the Ghost finds that not everything is as it seems, and that the previous writer might not have died so innocently. Was the Prime Minister a stooge for the CIA and US Defense contractor, Hallerton?

The Ghost Writer plays out much like stories you’ve seen flashed across headlines over the last ten years, only with the holes filled with juicy tidbits of conspiracy. It is obvious that The Ghost Writer is a fictional movie aiming itself a true events. Pierce Brosnan’s character is a thinly disguised Tony Blair clone, and the evil Hallerton bears a striking similarity to the evil Halliburton which has gotten so much flak since the start of the Iraq war.

The sad thing about political thrillers so thinly disguised, is that they will alienate easily half of the audience. When you see too much truth in fiction, you can only deem it as an attack if you don’t like the truth they present or you can use it to tout what you already to believe. Without taking sides The Ghost Writer manages to be one of the most intriguing political thrillers I’ve ever seen. Back room plots and cover ups ring true, and don’t present themselves as too far fetched. Which is where the allegory comes in very handy. Since the fictional events so closely resemble actual events they add a certain suspense and believability to the action.

Ewan McGregor turns in a solid role after being stuck in a series of clunkers over the past couple years. I think it should be noted that when he doesn’t adopt a silly American accent, he usually ends up doing better. McGregor seems to possess the right amount of quiet intelligence to make him believable as a man who would trade his soul and writing for a check. Pierce Brosnan does his best Tony Blair impression without going overboard into the realm of caricature. He is a man who seems to think he wields great power, only to be pushed around by those around him, leading him to considerable frustration. Although, the real gem in this cast is Olivia Williams as Ruth Lang. Williams is the character who holds all the cards, but lets no one know she is holding them. Her character works even more effectively even after the film is over. It could have not been done without the nuanced performance of Williams.

I was impressed by the sets within the film. Polanski, of course, is not allowed to shoot in the US, but almost all the plot takes place here. The film was mostly shot in Germany, where the crew used set dressings to make it look like Martha’s Vinyard, and other New England like locations. The attention to detail was so incredible, that even while looking for it I could not place where it was supposed to be.

If you are a fan of political movies, and can get past the issues with the director Ghost Writer is a solid thriller that will keep you guessing til the end. You’ll most likely find yourself like me, matching up every piece of the film to its real life counterpart, but don’t worry that was part of the deal. Writer Robert Harris was a journalist who covered and supported Tony Blair until the beginning of the Iraq War, which is when he wrote the film which is centered around a fictional version of Blair.