Review by the Raven 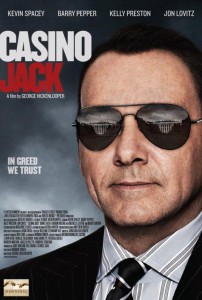 Whenever a film states that it is based on true events I get nervous…not because I doubt this statement, but because I realize that these events are not some made up story but something real that I may have to think about after I actually see the film. It’s like being told there are ghosts for real, and then you have to go outside and actually see them.

And so it was with Casino Jack…the story is based on the real life Jack Abramoff, Washington lobbyist who was involved in a huge scandal involving millions of dollars and many broken promises…even a murder. Directed by the late George Hickenlooper who gave us such amazing films like “Hearts of Darkness” and “Dogtown”, this was a beautifully laid out movie, with justice done to each character. It stars the amazingly talented Kevin Spacey as Jack Abramoff and Barry Pepper as his real life crime partner Michael Scanlon, it tells the tale of these men and how they scammed millions of dollars from various American Indian groups as well as foreign countries. Both men were “lobbyists” men who would try to sway political opinion with gifts and obviously money. The promise was to help these people with issues and political interest; to get help from Congress and various bills that they hoped to influence to their benefit from the various political figures in Washington. It follows these two men as they ridiculously bribe, cheat and steal from various people, saying they are helping them, but more interested in their own agendas than the people they represent. The way Hickenlooper portrays it Abramoff seems to think he is doing it for the greater good, but Scanlon just does it for the hard cash. Also, a very nice appearance by Kelly Preston as Abramoff’s wife. She underplayed the role, leaving the heavy hitting to Spacey, who just owns the film entirely.

I had two problems with the film…the first being that Jon Lovitz as fellow scam artist Adam Kidan was comical, and not in a good way. I just could not take him seriously in the film at all. It was like he was looking for the cheap laugh in each scene he appeared in. If this guy was this stupid in real life, how did he manage to get someone like Abramoff to believe in him at all? And how did he manage to run a casino or set up a hit on a guy? My second problem and one that cannot ever be fixed? That George Hickenlooper passed away before making more amazing films. He truly had a gifted eye and was a wonderful story teller. I had the chance to meet him and so deeply regretful that I cannot see more of his work.

We are blessed this week in Saint Louis with a small tribute being hosted for George by family and friends as well as Cinema Saint Louis which will be held before the screening of “Casino Jack” on Thursday November 11th at the Tivoli Theatre. If you have not seen any of his other films, see this one. It will hopefully make you want to see the rest. Rest in Peace George…you are missed.