FIRST PLACE RAMS, I LIKE THE SOUND OF THAT! 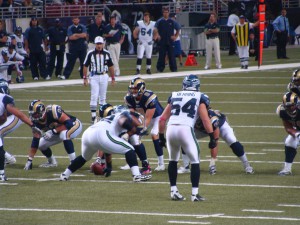 Why all the firsts and streaks ended?  Luck….NO!

Quarterback Sam Bradford (we will no longer refer to him as a rookie because he is playing like a Pro Bowler) has alot to do with the teams winning attitude and the Rams ability to march up and down the field against anyone in the league and put points on the board. Bradford was the fifth best quarterback in the league with 289 yards and 2 TDs, completing 23 of 41 passes thrown and just one interception. Sam hung in the pocket and completed passes to Danny Amendola, mark Clayton and Brandon Gibson in the endzone. 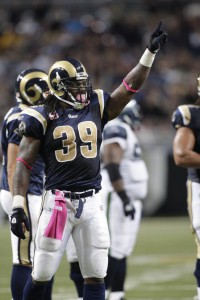 Steven Jackson, the Rams best weapon on offense, disregarded his partially torn groin (last week versus the Redskins) to start at tailback and gain 70 yards on 22 carries. He didn’t score any touchdowns but was able to move into the number two spot on the Rams rushing list ahead of Marshall Faulk!  Kenneth Darby came in to catch a pass from Bradford and scamper into the corner of the endzone for a touchdown!

Special teams is the best it has been since 2000 when the Rams went all the way to the Superbowl! Seattle possesses some of the best return men in the league with Leon Washington and Golden Tate. Washington returned two second half kicks for touchdowns last week versus the Chargers for touchdowns (99 & 101 yards). The Rams kept him contained to just 3 returns and an average of 28 yards. Tate was hit as soon as he fielded Donnie Jone’s punts netting just a 6 yard average on 3 returns. Josh Brown must have gotten the offensive line in order as they were able to hold off Seattle, and Brown was a perfect 2/2 on field goals (30 &31 yards). 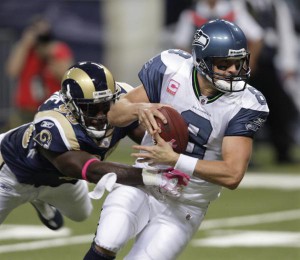 The Rams defense is now one of the best in the league! They made Matt Hasselback’s life miserable on Sunday, sacking the quarterback FOUR times! They also had an interception and recovered a Seattle fumble!  The defense also made it two games in a row that the rams won by 14 points, and this week didn’t allow Seattle into the endzone!

After 4 games into the 2010 season, your ST. LOUIS RAMS are TIED FOR FIRST PLACE!!!!! I like the sound of that!  Lets take a look at the NFC WEST, the Cardinals have no quarterback and a running-back that looks like he was in a car wreck, you see what we can do to Seattle and the fourty-winers are still sporting the doughnut at 0-4 in the cellar of the division! The outlook is good and we are rolling into Motown next Sunday to play the Lions! We can possibly be sitting atop the division ALONE in a week! 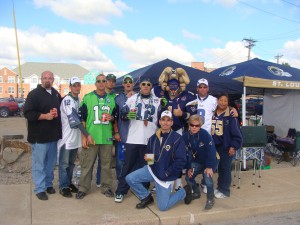 Farmland was nice enough to name Ram man’s tailgate the best in St. Louis and had it up on the big screen prior to the game sunday. We even entertained some Seattle fans on Sunday including fellow member of the Hall of Fame, Brad “Cannonball” Carter. Cannonball suffered the same result following the game on Sunday! 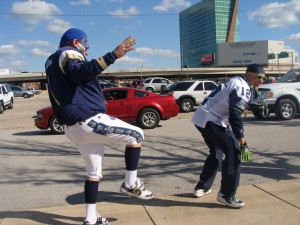 BRING ON THE DETROIT PUSSYCATS!!!!!!!

Following our Detroit victory Sunday, Everyone will be back at the Edge (my nickname for the dome) to take on the bolts from the west coast. Come by and see me at the corner of Broadway and Cole for a photo or a trading card.

I am Ram Man, relishing the winning streak and look forward to the next win! Check back later this week as we will break down the Lions and as always, I will see you in the endzone!