I could make a joke about the offense climaxing too quickly.

Once again, our starter turned in a terrific performance that went unrewarded. A day after Adam Wainwright gave up one earned run in seven innings while striking out 12, Jaime Garcia, the Mexicutioner, threw six scoreless innings, lowering his ERA to 1.14. This would be good enough to lead the league by nearly a full run if Ubaldo Jiminez hadn’t sold his soul on his way to a 0.88 ERA. 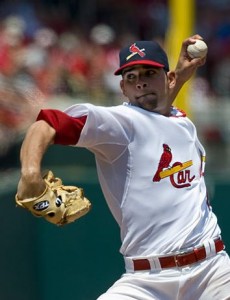 "Thanks for the run support, guys."

Fortunately, the Cardinals remain just one game out of the lead in the Central.

– I think the Cardinals are trying to be a little too aggressive on the basepaths. Colby’s overaggressive turn past second on Molina’s single last night got him caught up in a run-down, and again in the eleventh as he got caught up between third and home. Felipe Lopez was thrown out trying to steal in the first, just before John Jay cracked a single.

– Don’t blame Mark McGwire just yet for all the offensive woes. As noted above, execution errors on the basepaths are stealing a lot of chances away from the Cardinals hitters. And you can’t blame McGwire for Matt Holliday staring blankly at a 3-1 pitch on the outside corner that was in almost the exact same spot as the previous pitch, called a strike. Holliday then feebly swung through a changeup on the next pitch, leaving the bases loaded in the fifth.