‘Finding Neverland’ Teaches Us Not to Grow Up Too Much at the Fabulous Fox (Through Dec. 18)

Finding Neverland is the story of J. M. Barrie, and his journey to find inspiration for his most famous play: Peter Pan. Based on the 2004 film of the same name starring Johnny Depp as Barrie, the show is packed full of fantastical musical numbers (unlike the non-singsongy source material). There are plenty of films that simply don’t work as well as musicals (see Dirty Dancing, Young Frankenstein). Then there are movies that make incredibly fun stage productions that rival their celluloid counterparts (Legally Blonde: The Musical, Bring It On). I am happy to report that this show falls into the latter category, making one of the most entertaining musicals I have seen in some time.

CAMERON BOND is J.M. Barrie, the author of 1904’s Peter Pan, or The Boy Who Wouldn’t Grow Up – the first play featuring the adventures of Peter, Wendy and all the rest in Neverland. Barrie is a well-known playwright, struggling to come up with a show to fill the house for his boss Charles Frohman (TOM HEWITT). While working to finish his latest work in the park, he is introduced to Sylvia Davies (CHRISTINE DWYER) and her four boys: George (FINN FAULCONER), Jack (MITCHELL WRAY), Michael (JORDAN COLE) and, of course, Peter (BEN KRIEGER). While the first three boys let their imaginations run wild, Peter clearly is trying to grow up too fast. Barrie starts to open his eyes with the incredibly catchy number “Belive,” as the six of them proceed to make their day in the park into a grand adventure. Having been convinced that his latest work is just a retread by Sylvia, he decides to find inspiration in his new friends. Through a plethora of fun and energetic musical numbers, Berrie discovers his inner child and creates his greatest work with the help of the Davies Family. 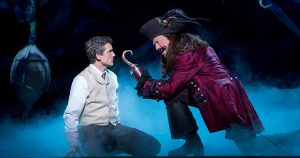 Circling back around to the film compared to the national tour, there are many things that make the musical a much better vessel for the story. This is a show about imagination, adventure, pirates, fairies, Neverland – and most importantly, the boy who can fly. Through the magic of the theater we can see Barrie fighting captain hook, while the entire stage is incredibly transformed into a pirate ship before our very eyes. It is one of the most magical and impressive stage transitions I have ever seen in “Live By The Hook.” Or early on in the show when Berrie invites Sylvia and the kids to a sophisticated dinner party, an act quite unheard of and looked down upon by his wife Mary (CRYSTAL KELLOGG). We see the rest of the cast frozen in place around the table, as he invites Peter into his imagination for the spectacular number “We Own The Night.” One-by-one during this toe-tapper of a song, the two wake up the rest of the Davies and the servants with fairy dust, and they have a fun and wild secret party of their own. These are just a couple of examples of numbers throughout the entire show where the imaginations of the characters come to life, through musical and magical set-pieces that really lend themselves to the stage.

Hats off to the creatives involved with turning this story into a musical. Composers and lyricists GARY BARLOW and ELIOT KENNEDY have a done a fantastic job with the songs, which have been stuck in my head long after leaving the theater. JAMES GRAHAM is responsible for the book, crafting a fun and compelling look into the life of one of the famous author. And this is not a simple show – there is a lot going on. Director DIANE PAULUS and Choreographer MIA MICHAELS had quite an undertaking with the intricate set pieces, costumes, and complicated dance numbers. Yet the result was nothing short of brilliant, and most importantly for a show like this – a lot of fun. 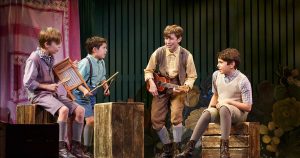 The kids in the show do a fantastic job, and there is no doubt that they are having as much fun as it appears. While the four of them are all great, BEN KRIEGER does a lot of the heavy lifting as Peter. His character starts off in a quiet state, having just recently lost his father, and takes a journey to rediscover the fun of being a child. As Berrie helps him use his imagination gain, KRIEGER lights up shows his wide range of acting talents. The boys also have a cute number where the four of them alone on stage perform “We’re All Made of Stars,” which is a lot of fun and lets them all shine.

You would be hard pressed to find someone who hasn’t grown up with one version of Peter Pan or another. After the play was released in 1904, Barrie adapted it into the novel Peter and Wendy in 1911. Then came probably the most well known version of the story to this date, with the 1953 Disney animated film. And I will always hold the 1960 film adaptation of the Mary Martin play near and dear to my heart. Fast forward through a handful of interpretations (like one of my favorites, the 1991 Spielberg film Hook), remakes and reboots, and audiences now have a spectacular new stage version which goes behind the scenes – yet doesn’t forget to include all of the fun and magic you come to expect with Peter Pan. Finding Neverland is a delightful show that the entire family can enjoy, perfect for the young and young at heart alike.

Finding Neverland plays the Fabulous Fox Theatre in St. Louis December 6 – 18, 2016! Tickets are $25 – $88, and the running time is 2 hours and 30 minutes with 1 intermission. Purchase tickets at Metrotix, or visit the Fabulous Fox website for more details.