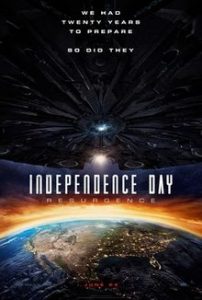 Everyone’s got their share of guilty pleasures. Things that we know aren’t good (or good for us), yet we refuse to let go of. I don’t think it’s a bad thing, really, unless your guilty pleasure is like murder or something.

When I was 12, a summer blockbuster named Independence Day rolled out in theaters and took the world by storm. Filmed on a $75 million budget, the movie went on to gross more than $817 million worldwide. Featuring an ensemble star cast and visual effects that garnered an Academy Award, ID4 became one of the biggest hits of 1996 despite a mediocre script and a somewhat jingoistic theme. Regardless, the movie quickly became one of my favorites and I anxiously await a sequel in the years to come.

Well, 20 years later, the sequel is finally here, and you have to wonder if it’s too late. Will Smith, star of the first film, was not re-cast; after the first film propelled him to international stardom, he became too pricy for the second film.

The good news, nominally, is that much of the original cast does return for the sequel. Jeff Goldblum returns as David Levinson, now the head of the Earth Space Defense (ESD) in this alternate universe. Given 20 years to prepare for the return, ESD has massively upgraded from the conventional weaponry in the original film. Moving up from F/A-18s to fighters based on alien technology, AMRAAMs and fusion weaponry to plasma cannons and cold-fusion missiles, the ESD has done what it can to get ready. Whereas Smith and Goldblum’s characters split top billing in the first film, this is clearly Levinson’s time to shine.

Unfortunately for the film, a lot can change in 20 years, including expectations. The first film succeeded in large part due to its impressive visual effects and (barely) passable acting, but Resurgence takes much of what worked in the first film and dumps on it. I mentioned that much of the original cast returns, but many of the key contributors of the first film are reduced to bit roles that end entirely too quickly, while others somehow miraculously survive near-impossible situations that leave your head scratching; in one scene, an alien is able to snipe fighter craft out of the air at will, but has the toughest time hitting a slow-moving vehicle on the ground.

Perhaps I was expecting to see more from the familiar characters in a sequel, but the film seems intent on moving on from the majority of them and removes much of the charm that made the characters appealing. Former President Whitmore (Bill Pullman), whose visions of the return invasion have reduced him to what appears to be a senile, paranoid old man in the beginning of the film, has a decent-sized role in the film. Levinson’s father, Julius (Judd Hirsch), returns to play a bit of comedic relief, but he contributes very little to the movie. The same can be said about Jasmine (Vivica A. Fox), mother of star pilot Dylan Hiller (Jesse Usher), who played a resilient survivor in the original but is little more than an extra in this movie. Some characters, such as Hiller and Connie (played by Margaret Colin in the first film) are written out entirely, either explained in a throw-away line or not explained at all.