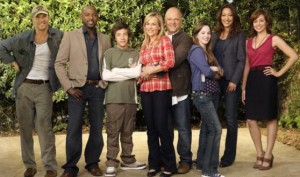 ABC’s No Ordinary Family is bound to catch a lot of comparisons to NBC’s recently demised Heroes. Why? Well, they are both about people with superhuman abilities, but that is pretty much where the similarities end. In Heroes, every character seemed to lament their change to superhero status, while in No Ordinary Family the characters embrace their new found abilities. The characters are not dark or brooding, just a family that has lucked into a series of extraordinary abilities.

What I find a bit ironic, is that the family gets their powers very similarly to Fantastic Four, which we all know the actor who plays the father in this series, starred in the film adaptation of the comic book .  The family has a doomed plane crash, and is granted powers by passing through a weird phosphorescent substance.

I will try not to give away too much of the plot, but there is going to be spoilers from here on out.

Overall the show has a lot of promise. Most of what was wrong in the pilot is easily tweeked once it goes to its episodic format. The special effects will probably see a boost as well if the show proves to be popular.  There are a lot of promised twists and turns coming. Keep an eye out for Tate Donovan as the doomed pilot. ($10 bucks says his character will be back). There is also a character who is a “Watcher”, I just hope his name is Rupert Giles.