Exit Through the Gift Shop 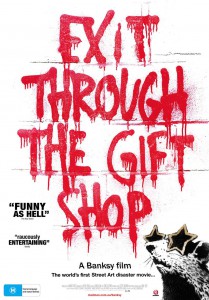 Exit Through the Gift Shop is about as entertaining as a documentary can get.  And while its subject matter, street art, is fascinating, the third act of this film will have you wondering if the wool is being pulled over your eyes; in a good way.

The film is directed by famous street artist, Banksy, but the film’s real (?) subject is videographer Thierry Guetta.  Thierry (pronounced Terry) is a French immigrant in Los Angeles who runs a successful vintage clothing shop in LA’s bohemian district.  Thierry also video tapes everything; and I mean everything.  Hours, days, and weeks of video can be found in Thierry’s house as he has his camera everywhere he goes. He records everything from his children playing to the mundane walking around town.  The camera seemingly never leaves his hand.  While visiting France, Thierry runs into his cousin, a street artist known as Space Invader, who is creating mini murals of space invader characters and gluing them all over Paris, and eventually the world, in strange and unique areas.  Thierry goes out with Space Invader on his graffiti adventures and before he knows it Thierry is hooked.  Space Invader introduces Thierry to some local LA street artists and Thierry quickly becomes a videographer for seemingly every major street artist in the world; documenting as many of their exploits as he can.  Thierry becomes obsessed. But there is one artist who eludes him in the street art world and that is the one who is widely considered the best, Banksy.

Now you might be asking yourself, “Wait a minute, how is Banksy unavailable if he is the director of this film?”  Well the way the story plays out Thierry eventually catches up with Banksy but when the time comes for Thierry to turn his footage into the definitive street art documentary Thierry isn’t quite up to the task.  It is at this point that Banksy takes over the film, and all of Thierry’s tapes, and tries to make something of them.  But as the man behind the camera changes, Thierry steps in front and begins to proclaim himself as the next great street artist.

It is unbelievable and bizarre where this goes and at this is where that wool might start creeping in on your eyes.  Thierry is motivated by the insistence of Banksy and Shepard Fairey to try his hand at art and what he turns up is hard a little hard to believe.  You should be asking yourself how genuine what we are seeing really is, but the film is crafted so well that you don’t even really care.  The film is funny, moves like a rocket is attached to its back and is full of fascinating and incredible imagery of the street art scene’s boom.  If the film would have stayed simply a chronicle of the street art scene’s rise to prominence the film would have been fantastic.  But it goes somewhere else and while it remains incredible entertaining you can’t help but question what you are watching is in fact now a piece of art.

Banksy and Fairey are on the record in the film’s third act saying that they aren’t quite sure how Thierry is gaining the success he is gaining as his work isn’t all that interesting or original.  In fact, the film asks the question “What makes something art?” in such an interesting and engaging way that the movie is almost over before you realize that the film’s final act might be one giant case study on trying to answer that question.  The artists in the film are baffled with trying to answer the question juxstaposed against Thierry’s rise to prominence.  It is all very interesting and worth many a discussion when it is all said and done.  And that sentence is as good as an endorsement as one can have for a film. The film will instantly engage your mind and provide endless fodder for discussion with your friends and fellow filmgoers you enjoy the picture with.

In the end, Exit Through the Gift Shop is centered on an engaging subject and subject matter that exposes you to a world few of us have ever experienced.  Dissecting the value and celebrity of the art world while also potentially subverting the importance of art proves to be a very rich discussion.  The film is fresh and funny and it will challenge you to figure out whether what you just experienced is in fact what it seems or rather an elaborate project for Banksy who is trying to get us to look at the world a little differently.

Exit Through the Gift Shop is an A-