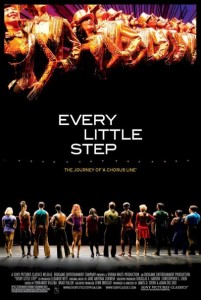 This documentary dives into the behind the scenes fight for Broadway glory as we follow the audition process for A Chorus Line revival show and the results is a fascinating look into the lives of these performers and the rare chance to observe these people bare everything in their soul as they wish for that shot at being a star.
The film moves between recordings from the original session where A Chorus Line was conceived where Michael Bennett and a number of his friends, all dancer and actors share their stories about how they made it got their chance or break, or failed to, while also peeking in on the auditions of the planned revival cast in 2006. The people producing the revival show all had a hand in the original production and through them and these tapes of their original conversations that inspired the characters in the show; we learn how the original production came together as we watch the revival’s pieces slowly fall into place.
Michael Bennett who passed away years before this film is seemingly brought to life through the passion of his peers and the tapes of his voice we get to here. The way the original show came together was a bit of an endurance match and groundbreaking for the time and the film is full of fun stories and struggles that they had to go through to make this play happen.
The story in modern day is just as compelling as we follow the casting of a few of the key characters in the production and we get to know some of the actors auditioning a little bit better so they are not just a nameless face dancing on screen. The film takes on the appeal of a reality competition of American Idol or similar production except it isn’t glamoured up or commercialized. We watch these people perform in a practically empty room in front of a few people who’s opinions matter and they pack is slowly whittled down to final auditions.
The ability to see these people bare it all and leave it all on table in the audition is a fascinating process and here we get to see it in its most pure form. You will find yourself making judgments and attaching yourself to certain actors and rooting for them to move on to the next round. The amount of suspense they get out of watching the audition process is almost a bit surprising and it will have you glued to your seat through the very end.
Outside being a history lesson on the original production and a look at the making of the revival the film also serves as a tribute/biography of Michael Bennett who spearheaded this production to life and actually lived quite an interesting life. They pull no punches when discussing his life and while it is a bit of a praise fest for the man, they don’t romanticize him like they could have and everything said seems rather honest.
In the end, Every Little Step is an entertaining and surprisingly tense documentary on a little know topic. Sure Broadway shoes are everywhere and we have all seen them, but few have any idea what the behind the scenes process to get one of these off the ground is really like. So many people and so much heart are poured into bringing these shows to life it is quite engaging and incredible to witness. While the film might drag a bit in the middle and could have covered a few more cast members it still does a fine job of balancing history with pulling back the curtain on the auditioning process which makes for a rather interesting amalgamation of story telling that works quite well for this doco and makes you want to see the production of the show as you walk out of the picture.
Every Little Step is a B-