Elvis Costello performs in front of his wheel of songs during the "Revolver" tour in Columbus, Ohio.

Your dedicated reviewer went all the way to Columbus, Ohio, on June 19 for the fourth installment of Elvis Costello & the Imposters’ “Revolver” tour. Costello brings the show to St. Louis tonight at The Pageant. Tickets are still available. Learn more at ElvisCostello.com.

Elvis Costello is just such a ringmaster. Minus the pickle juice.

Imagine my excitement when I sidled up to the rail in Columbus’ Lifestyle Communities Pavillion and noticed a gigundous wheel of 40 songs and albums taking up much of the stage. A game show of Elvis Costello music? Awesomesauce! A friend told me via text that Costello would pull audience members up to command his setlist by spinning the wheel, and I began plotting how much force to use on the spinner to land on “Brilliant Mistake” or “(What’s So Funny ‘Bout) Peace, Love and Understanding.” 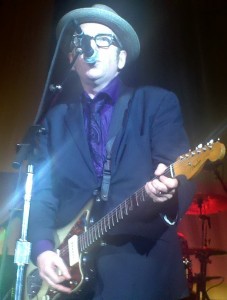 Elvis Costello leads the Imposters during his "Revolver" tour.

There was no opening band, so Costello and his Imposters got right to it. Donning a dapper suit and the first of perhaps six flashy fedoras, Costello jumped right into “I Hope You’re Happy Now” and a cover of Nick Lowe’s “Heart of the City.” He grinned as he played a blistering “Mystery Dance” and a few others before putting his guitar down, temporarily trading his fedora for a top hat and wandering into the audience to choose the first “Revolver” contestant. He selected a preteen who excitedly danced her way onto the stage and spun “Bedlam” as the next song. She jived first in an on-stage lounge and later in the go-go dancer’s cage as the band performed a version that had been slightly slowed down and jazzed up since its release on 2004’s The Delivery Man.

A few contestants later, a woman spun Get Happy, Costello’s fourth album. Because album spaces were considered “bonuses,” Costello played four selections: “I Can’t Stand Up for Falling Down,” an enthusiastic “High Fidelity,” “I Stand Accused,” and “Riot Act.”

One of the highlights of the main set was “And Your Bird Can Sing.” Upon seeing the Beatles cover on the wheel, audience members had excitedly yelled for it all evening. They didn’t leave disappointed – Costello bellowed the lyrics while Steve Nieve shot figurative rays of sunshine from his piano and keyboards.

The band left and returned for several brilliant encores, and Costello kept racking up the contestant count. Teenage boys, swooning women and giggling girls all got their time with the ringmaster. One young lady brought her instrumental songbook of Costello songs to the stage with her, and he gamely asked her to find a song for him to play. After she pointed to one, Costello looked doubtful and said maybe he’d come back to it. Costello made good on his promise a few songs later and made the girl go moon-eyed as he played “Less Than Zero” for her. 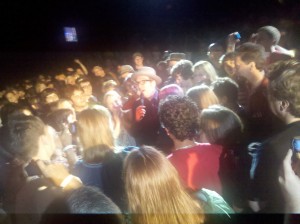 Elvis Costello works the crowd before getting mauled by a ReviewSTL.com reviewer.

Around this time, I began to realize that my chances to spin the wheel were dwindling, despite being front and center for the entire show. I was placated, however, when Costello took “God Give Me Strength” to the floor. The Costello-Bacharach ballad smoldered as he slowly wandered up the sides, behind the pub tables and back onto the main floor. He made his way to the center of the floor and paused right beside me for a verse. This is where I get to tell you in capital letters that I HUGGED ELVIS COSTELLO. This was an acceptable trade-off for my not spinning the wheel, so thanks, Elvis!

Costello returned to the stage and took refuge behind the piano for a bluesy version of “Pump It Up.” Wearing yet another fedora, Costello closed his eyes and bobbed his head as he took the audience to church during the gospel-esque number. He followed that up with a cover of Johnny Cash’s “Busted” and a long, firey version of one of my favorites, “(What’s So Funny ‘Bout) Peace, Love and Understanding.” I might not have spun the song on the wheel, but I still felt like I got a damn fine prize that evening.

Side note #1: The show took place on Father’s Day, and Costello was moved by a teen’s sign that asked him to choose his dad to spin the wheel o’ songs. Costello invited them both to the stage for a spin each, and he later played “My Three Sons” for the fathers in the audience.

Side note #2: The “Revolver” tour wheel is a rehashed concept that Costello used during his 1986 “Spinning Songbook” tour.

Side note #3: Full setlist can be found on Setlist.fm.