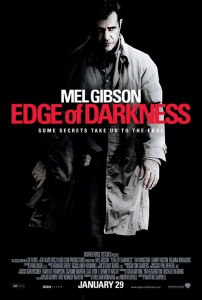 Mel Gibson returns to acting with his first role since 2003’s The Singing Detective in the new action-thriller Edge of Darkness.  He stars as Tommy Craven, a by-the-book Boston police detective whose activist daughter (Bojana Novakovic) is gunned down on his front doorstep.  While prevailing wisdom is that she is an innocent bystander with her father being the intended target, Craven believes there is something more at play.  His off-the-books investigation quickly reveals all the usual suspects involved in a conspiracy: the suspicious boyfriend, the too-slick-for-his-own-good boss (Danny Huston), the best-friend too scared to help (Caterina Scorsone), a mysterious government operative (Ray Winstone) and, of course, my favorite old chestnut, the evil Republican Senator (Damian Young).  (Really?  In Massachusetts?  A state in which only 12% of the citizenry are registered Republicans?  A state that, until about 10 minutes ago, hadn’t elected a Republican Senator in a generation and a half?  If you say so.)

The film is based on a legendary BBC mini-series of the same name.  However, compressing the complex and sprawling story from five and half hours to a mere 117 minutes has done the story a disservice.  Much like other adapted and condensed BBC miniseries (State of Play, The Singing Detective, Pennies from Heaven) much in lost in translation.  The extra time allowed the original versions time to evoke a mood and lay the groundwork for a grander story.  But here we get a film that feels more as if it’s giving us the bullet-points.  Whether it be Craven’s grief or his investigation or the conspiracy itself, it all feels a little to compact.  In an effort to include all the twist and turns and betrayals, the film ends up glossing over character motivation.

Winstone, as the mysterious government agent who’s spent his life working in the shadows, threatens to derail film by being too interesting.  He brings a level of commitment and charisma to the role that makes you wish it were his film instead.  Gibson gives a strong performance in his return to the screen although brooding intensity combined with righteous anger has always been something of a specialty for him.  But hey, play to your strengths, right?  Nobody’s paying to watch Pujols pitch.  In the end, Edge of Darkness is a good but conventional thriller.  Gibson and Winstone give strong performances.  But beyond that there’s nothing here you haven’t seen before.  It’s a paint-by-numbers conspiracy plot with what turns out to be, upon discovery, a somewhat dated protagonist.