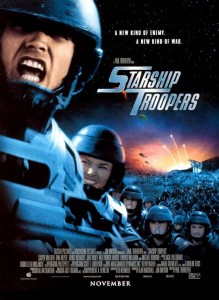 In an unspecified time in the future a group of high school graduates sign up for the military in an ultra-fascist, militaristic society to kill space bugs. No, no, no, don’t leave yet. It’s not as bad as it sounds.

I remember forcing one of my relatives to take me to see “Starship Troopers” when I was 13. When I left the theater I was 100% convinced I would never see a more badass movie in my life. It had everything I looked for in a movie—obscene amounts of violence, gratuitous nudity, and enough tongue-in-cheek humor to keep my little brain giggling for hours afterward. I recently re-watched “Starship Troopers” and my only thought beforehand was, “Is this going to hold up after 12 years or is it going to be just plain cheesy?” Lucky for us it certainly does hold up.

Most of today’s action movies seem to fall into the same generic formula and become seemingly redundant. This, however, stays true to 80s action form and even injects some steroids into the formula. This movie actually delivers some great news. Apparently all of our future offspring are going to be extraordinarily pretty and athletic. It plays out like an episode of Melrose Place, but with more explosions and nudity (with their current ratings they might want to consider this route).

I must stress if you are weak in the stomach you might want to skip this one. We get all kinds of bugs getting blown to green gooey bits and the soldiers being torn in pieces. Nothing here is left to the imagination. I get the feeling that Paul Verhoeven couldn’t really make up his mind about the kind of movie he wanted to make. On one hand we have bodies strewn about like the Omaha Beach scene from “Saving Private Ryan”. On the other hand, we have PSAs with kids stomping on bugs as a sort of gag.

The actors are all suited for their roles. Casper Van Dien (Rico) could probably work on his acting range a little more. Dina Meyer (Dizzy) does a great job as a tough chick without coming off as being obnoxious about it (cough Michelle Rodriguez cough). Denise Richards (Carmen) has very little range of emotion here with all of the horrendous things happening around her, but she serves as eye candy for the guys so it’s not a total loss. Clancy Brown (Zim) is an extremely underused actor and he plays the tough Drill Instructor role to a T. Neil Patrick Harris (Carl Jenkins) actually displays the most change throughout the movie. I never thought Doogie Howser had it in him. He does a good job here and I always appreciate seeing NPH in action. And last, but certainly not least, Michael Ironside (Rasczak). The man just oozes testosterone. He plays a hardass like he was born to play one. For any reassurance of his manliness look no further than his roles in “Total Recall” and “Robocop”.

So what’s the short and sweet? In the end, all of the anti-fascism undertones fall by the wayside and what we’re left with is a competently acted (for what it is) popcorn flick. My only complaint is that it was a little too long for this type of movie. They could have easily shaved 20 minutes off of the 129 minute runtime and we’d still have an action-packed funfest. If you check your brain at the door I guarantee you’ll have a blast at this cheese fest.

Documentary: This clocks in at just under eight minutes and is a pretty nice addition to the movie. I felt it could have been a little longer but whatever wasn’t covered here is covered in the commentary. Also, why do all the actors have 5 o’clock shadows here? It looks like Hollywood had a Bic razor shortage that day.

Filmmaker’s Commentary: Director Paul Verhoeven and Edward Neumeier, the writer, give the commentary here. I like how passionate Verhoeven is about trying to convince everyone he isn’t a Nazi sympathizer and how the movie is about the pitfalls of fascism and is a satire of world superpowers, particularly America. Throughout, Paul and Edward seem to politely butt heads about the content of the movie and that definitely shows through in the final product. It gives you a couple different angles on the movie but I fear it doesn’t include enough supplemental information to warrant a recommendation.

Theatrical Trailer: I must have never noticed it when I was younger but it seems trailers back then gave away too much of the story much like today’s trailers. Thanks, Hollywood.

Behind-the-Scenes Footage: I was actually impressed here. I didn’t realize how much CGI was used in the movie. For a movie that is 12 years old this really holds up by the standards of today. There is a section of screen tests presented here as well and if you wonder if you should watch it or not then ask yourself this question–Would you watch the auditions for 90210 or The OC? If you answered no then go ahead and just leave this one alone.
Extra Scenes: The scenes with Johnny and Carmen are just cheesy and not the good kind of cheesy either. Good thing those were axed before the final product. The scenes with Carmen and Zander just make Carmen seem more cold and flaky than she already is so that wouldn’t have been a necessary addition. These were wise cuts on Verhoeven’s part.

So is it worth buying?

If you’re an action fan this is definitely a nice addition to the collection and it’s a pretty “safe” movie if you’re just looking for some good entertainment without having to turn your brain on too much.