Disney shut up and take my money! That’s all I could think of when I finished watching the Wreck-It Ralph trailer. Sure, I’ve said this about other movies before, but as I don’t really get to say it enough let’s just let is slide. The video game fan in me immediately swooned when I saw characters like Bowser from Nintendo’s Mario series, Professor Robotnik from the Sonic series, and people like Kano from Mortal Kombat, and Zangief from Street Fighter. The Wreck-It Ralph trailer is basically a version of Donkey Kong that Disney can now merchandise, rather than take an already established licensed character. Some of the secondary characters being real video game villains really lends some oomph to the punch that Wreck-It Ralph is giving. 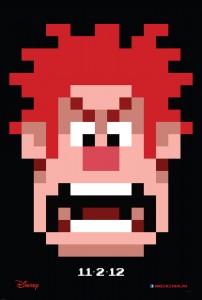 On another note, it’s refreshing to see Disney releasing quality animated titles outside of the Pixar brand. I’m hoping they can bring their own brand to another golden age.

Studio Summary: Walt Disney Animation Studios and Emmy®-winning director Rich Moore (TV’s “The Simpsons,” “Futurama”) take moviegoers on a hilarious, arcade-game-hopping journey in “Wreck-It Ralph.” Ralph (voice of John C. Reilly, “Talladega Nights: The Ballad of Ricky Bobby,” “Step Brothers”) is tired of being overshadowed by Fix-It Felix (voice of Jack McBrayer, “30 Rock”), the “good guy” star of their game who always gets to save the day. But after decades doing the same thing and seeing all the glory go to Felix, Ralph decides he’s tired of playing the role of a bad guy. He takes matters into his own massive hands and sets off on a game-hopping journey across the arcade through every generation of video games to prove he’s got what it takes to be a hero.

On his quest, he meets the tough-as-nails Sergeant Calhoun (voice of Jane Lynch, TV’s “Glee”) from the first-person action game Hero’s Duty. But it’s the feisty misfit Vanellope von Schweetz (voice of Sarah Silverman, “The Sarah Silverman Program”) from the candy-coated cart racing game, Sugar Rush, whose world is threatened when Ralph accidentally unleashes a deadly enemy that threatens the entire arcade. Will Ralph realize his dream and save the day before it’s too late?