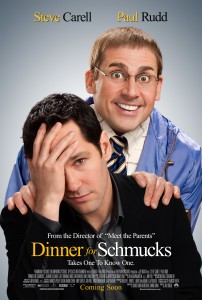 Don’t be A Schmuck…Go See this Great Film

Based on the French film “Le Diner de Cons,” ‘Dinner For Schmucks” could easily have been dismissed another Bad American remake. It could have been similar to the kind of thing we heard about the American version of “The Office,” which Steve Carell stars in, before it aired in the US. Carell and the writing in both of these cases are what prevents it from happening. Carell plays an IRS employee whose hobby is creating little dioramas with dead mice whose name is Barry. Barry is a sweet little dork, that tries too hard to help Tim (Paul Rudd). Tim who literally runs into Barry at a time when he needs a Schmuck (idiot) to take to a dinner his boss is throwing.

Why does Tim need a schmuck to take to dinner? It is a game the people on the 7th floor play. Tim being only on the sixth floor wanting to move up is invited to play this game of who can bring the biggest schmuck to dinner game. The only problem is Tim is humane enough to see the base degradation in such a game – his girlfriend, Julie (Stephanie Szostak), makes sure of it – but not so much that he doesn’t go through with it anyway.

This is where the adventure and the hilarity ensues, through a mix-up in which Barry shows up at Tim’s house for the dinner night early. This is where Barry messes up Tim’s life with a certain desperate enthusiasm and just won’t go away. He puts into jeopardy Tim’s job, his relationship with Julie, his health and just about everything else in his life.

At this point, you’re probably thinking, I hate this kind of movie and character, and I’m right there with you. The clueless schmuck who haphazardly destroys everything around him is typically a character we have seen many times before, and usually gets old really fast. But Carell’s so good at this character. For one thing, he’s really funny, which helps. But he also gives Barry a sort of bruised humanity that’s usually not found in these roles. Don’t misunderstand, he’s still a pathetic idiot, which is one of the better choices director Jay Roach makes. But we find out a little about what goes into making him such a lonely fellow.

We meet many great characters throughout this movie such as; Thurman (Zach Galifianakis) playing Barry’s co-worker and tormentor, who doesn’t realize he’s as much a loser as Barry is. Kieran (Jemaine Clement) is fantastic as a wild-man artist for whom Julie works, pure untamed artist who justifies his decadence by calling it all part of “process” they way he pronounces is make it funny. Darla(Lucy Punch) who plays Tims stalker, you will have to see the movie to understand how funny the mix up between her and Julie is. All these Characters we meet before we even get to the dinner. The adventure of getting to the dinner is as funny or more funny then the dinner itself.

The dinner itself also is better than such a thing might sound, although it follows a predictable route. Are we supposed to laugh at the schmucks, or does that lower us to the level of the evil executives? If this sounds like a moral quandary, Roach makes the answer clear: laugh. And he has Carell to mop things up if we feel bad about it! There are too many (Schmucks) characters you will meet at the dinner to list and get into and part of the movie would be ruined if I gave away the Schmucks Special abilities!

For a Summer that has had some great movies this is the first Adult Comedy I have enjoyed. I would say it Rivals Last years “Hangover”. I think I laughed at it as much as I did at Hangover but it is a different comedy. Dinner is a Funny movie that has a great story line and even come with a Moral to the Movie. Buckeye Brad Gives Dinner a B+. If you want to laugh this weekend go see this Movie! One last note I loved “Despicable Me” as you read in it’s review. I love this movie as well and probably because Carell Is now one of the best comedic actors in Hollywood today.