DESTROY THE BRAIN presents LATE NITE GRINDHOUSE: THE BEYOND

Are you a fan of horror films? Luckily for St. Louis residents Andy Trifenbach and his Destroy the Brain podcast are presenting a new monthly, Late Nite Grindehouse, feature every month at the Hi-Pointe theater! Come check it out this weekend as they present The Beyond! 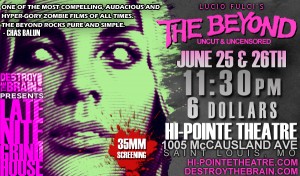 DESTROY THE BRAIN in association with GRINDHOUSE RELEASING is proud to bring Lucio Fulci’s masterpiece THE BEYOND to the Hi-Pointe Theatre as the second entry into DESTROY THE BRAIN presents LATE NITE GRINDHOUSE. Showing in 35mm, experience a hellish, surrealistic nightmare that only the Italian master of gore could bring you. Originally released in 1983 under a heavily censored title of Seven Doors of Death, Fulci’s second entry in his unofficial Gates of Hell trilogy was unleashed on drive-in screens and grindhouses in the US for a brief period of time. Over time, bootlegs emerged of the film in its uncut form, mainly sourced from an uncensored Japanese laserdisc. Finally in 1998, Bob Murawski and Sage Stallone completely re-mastered the film and got Quentin Tarantino to endorse the release through Miramax. The film gathered over $1 Million during its midnight show run. For fans of the director Lucio Fulci (CITY OF THE LIVING DEAD, ZOMBIE), this is a film that must be seen on the big screen. If you are unfamiliar with Fulci, this movie is a great one of his to start out with.

THE BEYOND will be showing at Midnight at THE HI-POINTE THEATRE (1005 McCausland Ave. St. Louis, MO) on Friday, June 25th and Saturday, June 26th.