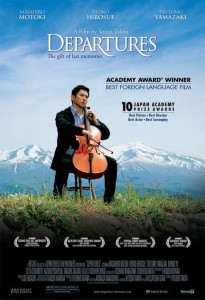 This 2008 nominee for best foreign language film at the Oscar’s, Departures is a very engaging, funny, and thoughtful look at death and letting the living come to peace with it and it is all wrapped around the wonderful story of a man finding himself and coming to grips with his past.

Daigo Kobayashi is an aspiring concert cellist that finally gets his break with a major orchestra, only to have them go broke shortly after. Left at a crossroads in his life, he decides to move back to his hometown with his young wife in the house he was raised in that his mother left to him when she passed away. His father having abandoned him and his mother when he was six, Daigo, has always quietly grappled with his feelings towards this loss and how it affected his life. When scouring the help wanted ads back in his home town, he comes across a well paid position that requires no background and will be full time work; the ad’s main focus is the word “departures” which Daigo reads into meaning something in travel. Daigo quickly finds out that it is not a travel agency, but it is actually a coffining service that prepares the deceased for their final resting place. Daigo, overwhelmed and shocked by some of the things he see and experiences can’t turn away the money, but he is afraid to share his work with his wife Mika that hints at something off with his feelings on his job.

Now, the film really shines in its ability to toss things back and forth between some very fine comedy and rather poignant drama surrounding Daigo’s clients and his own personal life. Dotted with some really great characters, not one is wasted in the film and every minor role player in the picture gets a very satisfying emotional pay off. The director, Yôjirô Takita, gets so much in so little work out of a number of actors in the film, it is quite impressive. From quick emotional scenes at some of the coffining ceremonies, to a very well done scene around a cremation, there is just some great work all around.

Takita’s ability to also create such good humor in such a bleak topic is as good as anything done in this spirit outside Six Feet Under. The film is actually an interesting and appropriate companion to that series, so if you are a fan of the show you should probably seek this one out as well.

The cast helps Takita to really help elevate the material and Masahiro Motoki really helps sell the picture by handling both the comedy and the drama with ease. Using physical humor and dead pan delivery, Motoki carries the picture while letting the superb supporters flourish and do what they need to do. Tsutomu Yamazaki is wonderful and steals every scene as the owner of the company Daigo works for. Both hilarious and wise, he becomes a surrogate father of sorts for Daigo as they bond over their work. Ryoko Hirosue is also adorable as Mika and really creates a real woman you can go for. Japanese women sadly tend to get played so strict, cold, and rigid, it is nice to see a change here, and Hirosue captures something unseen in most wives on the silver screen from Japan; at least from the limited bits I have seen.

In the end, Departures was a very worthy recipient of the foreign film Oscar last year, though I still would have gone with Let the Right One In, and one you should seek out now that it is available state side. The focus on a morbid profession does not seep into the tone of the film which is humorous and heartfelt and will grab hold of you as you get swept up in the story. The film does run a tad long and has an odd montage in the middle to move things forward, but it felt out of place, but none of these things do much to damper this quality picture that I look forward to revisiting in the future as part of my collection. So seek out Departures, I think you will find yourself pleasantly surprised.

Departures is an A-