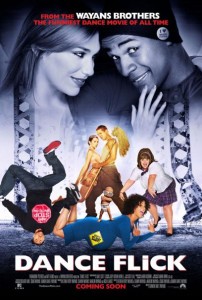 The latest spoof flick from the Wayans has a success ratio of about 40/60 when it comes to the jokes, but with poor leads and zero story nothing else gives the story a reason to watch a film that will make you laugh less then half the time.

Megan is a Julliard wannabe that wasn’t able to make cut and as a result her mother died on the way to the audition, which she blames herself for in the meantime and won’t dance. Thomas is a street dancer that is in debt to an obese crime lord, Sugar Bear, due to his crew’s recent loss in an epic street battle that ended with the death of one of their contestants. They both end up attending Musical High School which is populated by stereotypical characters and rip-offs from a number of successful music franchises like Hairspray, Ray, High School Musical and others. The two slowly become an item as Megan is pushed by Thomas to dance again. Added into this are a series of spoof jokes, toilet humor, and race fueled puns and jabs that eventually lead to a final dance off.

The film like I said is fairly hit or miss across the board with the second half, of the thankfully short runtime of 83 min, being quite dull until the final dance scene. To be quite honest I wasn’t that down on the movie for the first half or so, but once the scenes began to focus on Thomas and Megan, in which neither actor could not act nor was that funny, your patience begins to wane rather quickly.
Inserting a character that looks like one from another major hit isn’t a joke and when the film is spoofing and making jokes along these lines it rarely works. When the Wayans write some original material and write some decent sight gags is when the film works the best. The two dance battles are also fun and fairly creative as well, but they are to short too few to save the movie in any regards; and they probably couldn’t in the first place.

Marlon Wayans was one of the nicer moments in the picture as a kooky drama teacher that shows up for one scene, but many of his jokes still fall flat. Keenen Ivory Wayans is also humorous in his two scenes, but again nothing really special. Amy Sedaris has the most consistent laugh ration of anyone in the film most likely, but this is more due to a prosthetic sight gag between her legs. David Alan Grier was usually quite funny in a fat suit as the crime lord Sugar Bear as well and got more then a couple chuckles out of me. Shawn Wayans also got me a couple times as a neglectful father as well. Everyone else was pretty much worthless and not very funny other then a note here or there, but overall no one stands out at all.

In the end, Dance Flick is sadly not worth your time. A 40% success rate might be better then the last few spoof movies to hit the cinemas, but it is still a pretty failed effort at resurrecting the genre. I don’t know what it is going to take to bring this genre back, and Walk Hard was a step in the right direction, but the Wayans crew wasn’t able to continue the trend and I don’t know if they will anytime soon if they consider this a worthy effort.

It gets an F, but if you like these kind of films, you might get a little something out of it; maybe.