“Curious George 2” is out on DVD! Enter to Win a Copy Today! 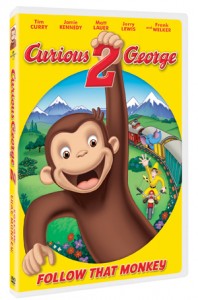 As an added savings value to consumers for a limited time, a $5 grocery cash check card mail-in offer will be included in DVD copies of Curious George 2: Follow That Monkey and the purchase of the DVD includes an instant $3 savings towards any Curious George catalog, TV or DVD title purchased in tandem.

Children and parents everywhere have delighted in Curious George’s adventures for nearly seven decades. Created by Margret and H.A. Rey in 1941, Curious George has provided the inspiration for a flourishing line of educational and entertaining properties that includes “Curious George and the Golden Meatball,” an original live musical stage show currently touring the U.S., as well as the popular and critically acclaimed PBS children’s program, a line of original books, interactive games and toys, and an interactive attraction at the Universal Hollywood theme park.

The world’s most beloved and inquisitive monkey is back in Curious George 2: Follow That Monkey, the fun-filled sequel to the hit animated movie. Join Curious George and The Man with the Yellow Hat as they set out on a madcap cross-country adventure to reunite Kayla, a homesick elephant, with her family. This unlikely trio faces all types of comic calamities and colorful characters and in the end, learn that with family, friends and determination, you can achieve anything. Featuring the voices of Tim Curry, Matt Lauer, Jamie Kennedy and Jerry Lewis, Curious George 2: Follow That Monkey, “proves that family, friends – and curiosity – are number one.” (Francine Brokaw, Los Angeles Family Magazine)

All you have to do is register for my.reviewstl.com and post a comment about why you want to win! Winners will be randomly drawn, and notified via e-mail.