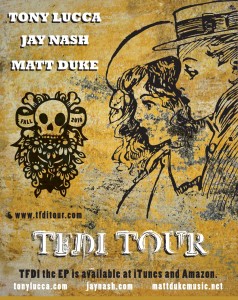 There are times when you go to see a great show, and you take a look around and think, “Why aren’t there more people here?”  Such was the case of the TFDI (or the Totally Fuckin’ Doin’ It Tour, as the audience was told by Jay Nash).  When I see musicians the caliber of Tony Lucca, Matt Duke, and Jay Nash I expect to see a packed house at a large venue. Why? Because they deserve it. Each one of these artists are immensely talented, and extremely entertaining to watch.

The show started with all three musicians joining each other on stage for a couple of lively songs, and a few moments of banter. After performing a couple songs as a group, Lucca and Nash left the stage to Duke, who performed a solid set. Duke’s guitar seemed to be having a bit of trouble, and caused his rousing performance of “I Got Atrophy on the Brain” to be cut abruptly short.  Duke continued on with a couple of solo songs, and was quickly rejoined by Nash and Lucca to help him with a few of his own songs.

There were no true distinct sets in this show. There was a lot of interchanging roles on the stage, but each artist only performed a few of their songs solo. At first I was a bit disappointed,  as all three of these guys sound incredible with just their guitars and voices. However, after seeing them perform together they really enhance the raw power that these artists enhance. Nash, Lucca, and Duke all know how to play a mean guitar, and pair it nicely with powerful voices, wrapped up in a nice bit of musicality.

Jay Nash was the second of the trio to perform some of his solo set, and was easily the most affable of the three. Nash was willing to throw out a joke more quickly than the other two, and it really complimented the nature of his two tour mates.  Nash was the one artist I hadn’t heard much of before coming into Off Broadway last night.  I didn’t know really what to expect, but I was blown away by the power of his lyrics and performance.

The last solo performances of the night were performed by Tony Lucca. This was my third time seeing Lucca in the past year, and he has continually impressed me with the power of his voice.  The bluesy quality mixed with a bit of folk rock really plays well.  I was astonished to learn that one of my favorites by him, “Death of Me”, was written in only ten minutes. As a writer myself,  I can relate to something just pouring out of you. Sometimes things just click.

I was originally going to title my review, “Holy F That was Awesome!”, but I didn’t think that would be appropriate, and it probably wouldn’t show up real well in the search engines.  The crowd wasn’t huge, but it was lively, and that makes a bit of a difference. All of us in that room were held in awe at the performance in front of us.  I can only hope that these guys find bigger audiences in the future, because they absolutely deserve it.