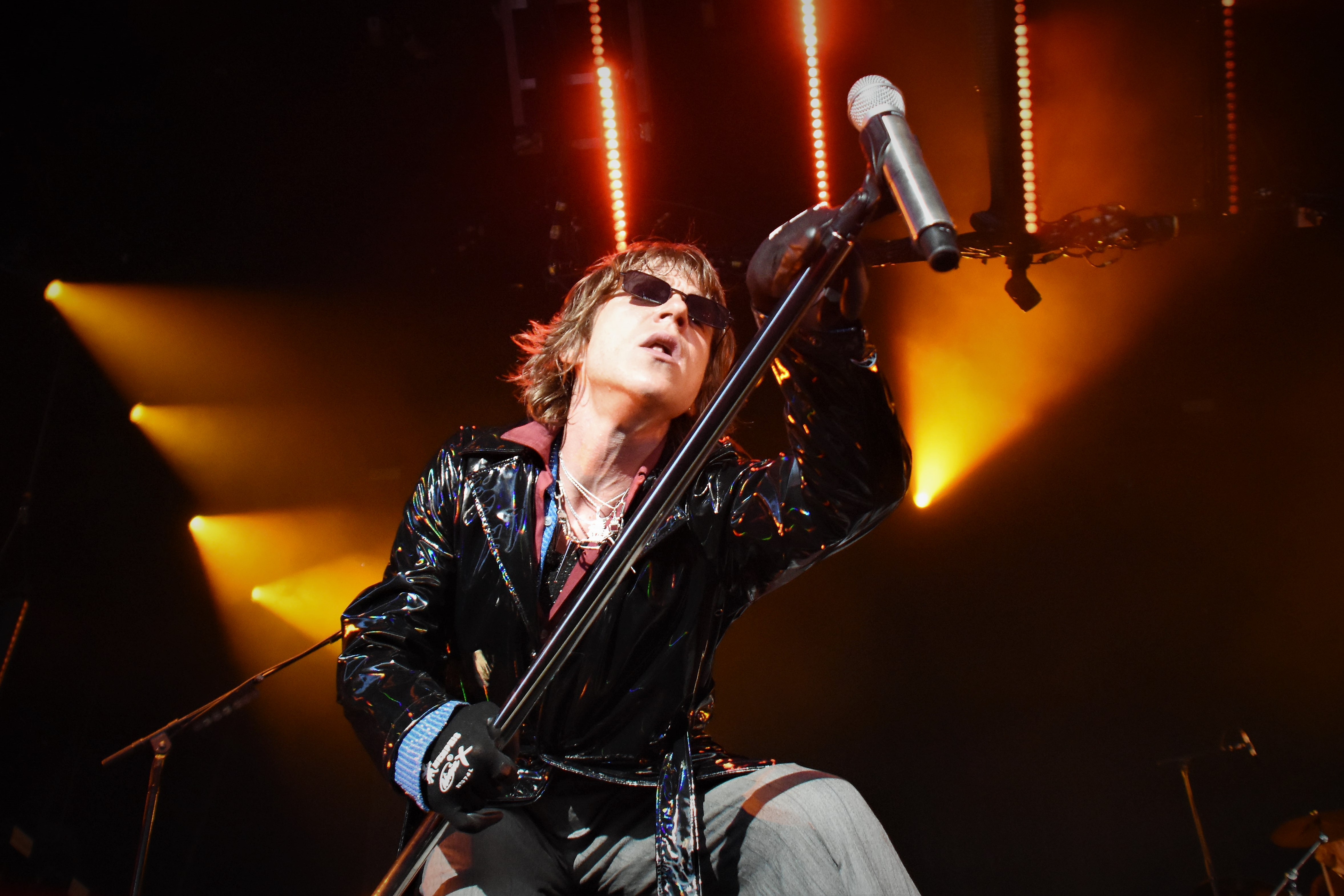 Cage The Elephant, wow.  The band has been around for more than a decade, but if you were a first-timer to their live show, you were treated to some insanely wigged-out stage theatrics on Monday night at Hollywood Casino Amphitheater.

Frontman, Matt Shultz, epitomized the definitive realm of stage presence.  He very enthusiastically and unapologetically owned the stage, the walls, and every eye in the place.  He also owned the face plant that he took on stage resulting in blood running down the side of his face.  Reaching up to his eye to assess the damage, he said to the crowd, “Heh….That’s real!”. The showman literally left his blood and sweat on the stage and showed no reservation whatsoever.

The band appeared on stage before the frontman and greeted fans, Brad Shultz, raised a blue solo cup, welcoming the crowd.  Wasting no time, they went straight into “Broken Boy” before Matt Shultz blazed on stage, immediately claiming his ownership.  He appeared in a black/iridescent trench coat and a safari-type hat with what appeared to be pantyhose draped over it. Throughout the set, he will have shed many layers of clothing, all the way down to a flesh colored two-piece spandex-y getup.

The audience was crazed.  Most of the crowd was initially processing the shock of the charismatic stage performance by Shultz, but soon the roars from spectators was overwhelming.  Long time fans knew what to expect and were enveloped from minute one.

Beck followed Cage The Elephant as the headliner.  He kicked off his set with his 1994 breakthrough hit, “Loser”, followed by “Devil’s Haircut” and “New Pollution”.

The stage was illuminated by dramatic spot lights and a giant diamond shaped LED screen behind him, projecting various perspectives of the singer in real time.

His presence was a bit surreal, requiring little effort on his part.  I mean, it’s Beck. *shrugs* All in all, a solid Beck performance. Beck did what Beck does.  However, his set seemed to be a bit short at just over an hour, compared to Cage’s 75 minute brain combustion.

The show also billed Spoon, as well as Wild Belle as the opener.

Spoon rocked a nostalgic set despite performing songs from their new album, “Far East Empress”.  Some may say that Spoon should be headlining their own tour. However, joining this tour has likely given them the bump they need to head in that direction eventually.

Wild Belle opened the early show at 6:00pm, bringing a very avant garde sound.  Incredibly unique and artistic, some coining it as a bit “weird”, it wasn’t a terrible fit for the tour and the acts to come.  Especially, complimenting some of Beck’s mid-career, cutting-edge productions.

Cage The Elephant dominated this show in almost a violating way, and I mean that as a term of endearment.  If you’re there for Beck, you were likely sucked in by Cage. If you were there for Cage, you got what you wanted.

The collective show receives a B+.