There are some books that come along, grab you by the balls and never let go. The Walking Dead is one of those comics.  I’ve been reading this book 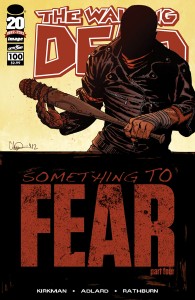 since issue one, and it has never let me down.  I don’t think anyone knew how successful the book would be when it started in 2003.  It was a smash hit in comic shops and went on to become one of the most popular shows on AMC (the third season starts in October).  Here we are, 100 issues later, and the book is still going strong – ever changing the status quo and ripping the guts (pun intended) out of its readers.  Before you read this review, I’m going to warn you.  This issue is really rough, and I’m going to spoil the crap out of the book.  READER BEWARE!

This issue picks up with Rick leading a small group of survivors to warn a nearby community (Hilltop) about a recent attack by renegades.  Glenn convinces Maggie they should leave Rick’s group and stay at Hilltop.  Rick quickly realizes they will not make it before nightfall.  With no other option, Rick decides to stop and wait until morning.  This is when the shit hits the fan.  Rick’s group is ambushed by the group of outlaws.  In what I can only describe as some of the most intense pages of comics I have ever read, Negan (the leader of the outlaws) tells Rick he’s screwed, Rick now works for him, and he’s going to kill one of Rick’s group to make sure he understands.  Negan chooses Glenn.  Not only does Negan kill Glenn, he brutally beats him to death with a baseball bat covered in barbed wire.  With that, Negan walks away.  The final panel is of Rick and his crew kneeling over Glenn’s dead body.

No one is ever safe in The Walking Dead.  Mr. Kirkman lulls readers into a false sense of security and then rips the carpet out from underneath them. He did this in the prison when he killed Laurie (Rick’s wife) and Judith (Rick’s baby daughter). Now he’s done it again by killing Glenn, a mainstay in the book since issue one and a character that readers have come to really care for and like.  That’s what Mr. Kirkman is so good at.  He can capture that raw emotion and put it into words.  It’s really no wonder this comic is as good as it is.  It’s not just about zombies.  It’s about the people struggling to survive, and Kirkman gets that.

The scene where Negan chooses Glenn and subsequently kills him would not have the same impact if it weren’t for the incredible art of Charlie Adlard.  The way he lays out his panels and the facial expressions he uses really makes you feel the tension and terror of the characters.  His art packs the emotional punch needed for this scene.  The horror in Rick’s face when he realizes there’s nothing he can do. The fear in Glenn’s eyes when he can see what’s coming.  The pacing of the art and the breakdown of the scenes builds tension and adds to the gruesome nature in which Glenn is murdered.

The status quo has changed again, and I can’t wait to see where it goes from here. It is noteworthy that The Walking Dead has reached 100 issues.  I can’t remember a creator owned title reaching that landmark.  It’s a pretty impressive feat.  Congratulations to the entire Walking Dead team.  It’s been one hell of a ride, and I don’t see it slowing down any time soon.