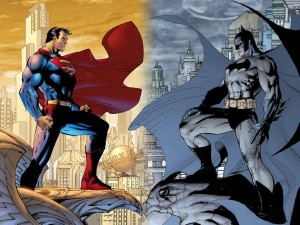 I am a Superman guy.  Always have been and always will be.  The Superman books were my first introduction to the world of comic books.  There was a time when The Man of Steel was DC Comics number one guy.  He was every where.  Lunch boxes, cereal boxes, toys, movies, cartoons, prime time dramas.  Alas, The Man of Tomorrow has been replaced.  In his spot, there is a dark and brooding vigilante who will stop at nothing to protect his city.  I am referring, of course, to The Dark Knight – Batman.

Batman was the creation of Bob Kane and Bill Finger in May 1939.  DC Comics wanted to build upon the success of Superman with a new character.  Bill Finger and Bob Kane came up with the story of a young boy who sees his family brutally murdered.  He swears to avenge his parents and travels the world honing the skills he will need to come back to Gotham and exact his revenge.

The Batman/Bruce Wayne character has gone through many changes in the past 74 years. The most notable incarnations are the campy hero of the 1960’s “Batman” TV show staring Adam West and Burt Ward and the dark and brooding version from Frank Miller’s “Dark Knight Returns“.  Tim Burton and Christopher Nolan embraced this darker version and made some great films (I won’t bring up the Joel Schumaker flicks).

There have been many incredible Batman stories over the years, but a select few define the character.  “Batman: Year One” is THE Batman origin story.  Written by Frank Miller and drawn by David Mazzucchelli, Year One tells the story of a young Bruce Wayne donning the cape and cowl for the first time and was the inspiration behind Batman Begins. “The Dark Knight Returns” by Frank Miller is also influential.  In the not too distant future, Bruce Wayne has retired after the death of Jason Todd (the second Robin) and is now waiting to die.  The return of an old villian prompts him to become Batman once again.  “The Dark Knight Returns” is the version of Batman we see today.  There are other stories (The Long Halloween, Dark Victory, The Killing Joke, Death in the Family, and Knightfall) that are very important to the Batman Mythology.

Scott Snyder redefined Batman again in issue 871 of Detective Comics by telling the story of Dick Grayson (the first Robin and later Nightwing) taking over the mantle of Batman. Artists Jock and Francesco Francavilla worked in tandem with Snyder.  These three men told one of the best Batman stories in recent memory (go pick up Batman: The Black Mirror).

DC Comics rebooted the entire universe in 2011. Scott Snyder was moved to the main Batman title with superstar artist Greg Capullo.  They are 10 issues into the “Court of Owls” storyline and have just dropped a massive bombshell on the entire history of Batman (I’m not going to tell you what it is).  Capullo’s art fits seamlessly with Snyder’s writing.  They are putting together a historic run on DC’s top book.

With Chris Nolan’s final Bat film The Dark Knight Rises coming out this July, a new Saturday morning cartoon, Beware the Batman, heading for Cartoon Network, and the dominance of the Batman comics,  there seems to be no stopping The Caped Crusader.  As a fan of comic books and pop culture, I can’t wait to see where he goes from here.  But I still have hope The Last Son of Krypton will be the number one guy again.  Will the Zac Snyder directed/Chis Nolan produced “Man of  Steel” bring it home? I guess we will have to wait until 2013.

Please feel free to leave your thoughts and comments below.  You can hit me up on Twitter at @JoeyButts21.