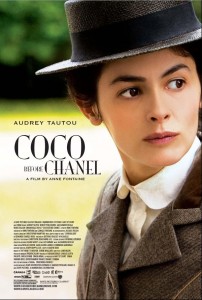 Anne Fontaine enlists Audrey Tautou to star in this solid, if run of the mill, biopic that doesn’t do a whole lot that is interesting or different but has great performances from all three of its leads and is a quite remarkable story surrounding the rise of Coco Chanel.

Starting off as a singer at a brothel after be raised in an orphanage for most of her young life Gabrielle Chanel is deemed Coco after a song her and her sister sing by a patron, Balsan, who ends up helping her on her way to dominating the fashion industry.  When her sister runs off to outside Paris with her potential suitor, Coco decides to hunt down the Balsan who lives outside Paris as well and is actually a wealthy man.  Coco becomes a sort of muse just loafing around his house and expanding on her fashion eye as she goes against the grain of the traditional French wardrobe.  While she has a relationship of sorts with Balsan, a young businessman nicknamed, Boy, enters her life through Balsan and they two’s attraction becomes more than either can bare.

The film is very run of the mill when it comes to biopic’s but it is done at a high quality and doesn’t dull till near the end where it lingers a bit to long before moving on to the finish.  Sure it’s nice when someone puts a fresh spin on the genre, but Fontaine knows she has some good material to work with and Coco’s breakthrough and uniqueness give the film the fresh feeling a biopic needs to stand out from mediocrity.  Chanel’s work and style was so revolutionary and forward thinking, it was really quite remarkable to watch her rise and doing it almost single handedly along the way.

Audrey Tautou is wonderful as always and flex’s her acting muscles on almost ever level.  Singing, dancing, romance, woman of power, broken hearted, she gets a little bit of everything to work with and never falters as she creates this powerful and confident woman.  She also builds some fantastic chemistry with he co-stars and we buy into this unconventional love triangle and the relationships she holds with these men in and out of their respective romances.  Benoît Poelvoorde plays Balsan and just nails the part as a rich mogul who has feeling for Coco but is apprehensive to share her with his upper crust friends as fear of embarrassment.  But he quickly finds out that she is an excellent and interesting social tool and her appearance makes him more relevant which he likes and Poelvoorde captures Balsan’s slow realization on his feelings with ease.   Enter Alessandro Nivola as Boy who is younger and more suave than Balsan and English to boot and we can’t blame Coco for getting swept off her feet.  Charming, handsome, and a romantic, Nivola is super convincing in the role.  Oozing sexuality and seducing with his eyes he also brings the respect needed to the situation that helps make this triangle so convincing.

In the end, Coco Before Chanel is a solid biopic and a showcase for the three main actors involved.  All giving top notch performances, the actors help to really tell this remarkable tale of a self made woman in a time where a woman doing what Chanel did was almost unheard of.  An engaging film and story that rarely fail to engage is an enjoyable experience through and through.  Fans of Tautou will have plenty to enjoy and this is a very accessible foreign film as it fits right in with Hollywood’s style of filmmaking, if that is good or bad, that is for you to decide.

Coco Before Chanel is a B