Review: CHICAGO Brings Dance, Liquor and “All That Jazz” to The Muny in St. Louis 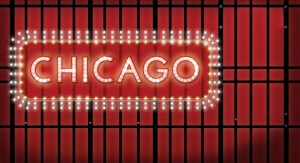 When I saw the movie adaptation “Chicago” almost a decade ago, I knew absolutely nothing about it the story, the music, the dancing, anything.  And I was completely astounded.  It quickly became one of my favorite films of all time.  I loved the music.  I loved the dancing.  I loved the actors in the roles.  I just thought it was a near flawless film.  I couldn’t wait to see the stage version that it was based on.  Several years later I did get to see it on the stage, and last night I got to see it once more.  I must say, while the stage show is a different experience from the movie, the show does not disappoint.

“Chicago” tells the tale of Roxie Hart’s quick rise to fame.  But why has Roxie become so famous?  For killing a man of course!  Is there really any other way to gain fame other than scandal.  Velma Kelly is equally as notorious for the deaths she is accused of, but her star is waning as Roxie’s rises.  Billy Flynn is the only man who can steer Roxie away from conviction, but can Roxie’s growing ego allow him to call all the shots, or will another little lady be filling headlines before Roxie makes it to the stand?

For those who have not seen the stage version and only the movie adaptation, let me give you a heads up to some major changes.  The first act features very little exposition in between songs.  The story moves along quickly from the start of one song to the other, so don’t expect too much character conversation in between.  The second act features less songs and more dialogue, but it is still far removed from the film.

Also, the set is extremely minimal.  You will not see a lot of set changes on stage at all.  The few additions include some desks and chairs.  Not that anymore is needed.  The story is about the characters and their stories through song.  But the movie, obviously, expanded this quite a bit.

There are also a variety of songs that are in the show that did not make it to the film.  The exclusion of these songs served the movie well.  But as a fan, it is nice to get some surprises during the show, particularly “Class” performed by Velma Kelly and Matron Mama Morton towards the end of Act 2.

Overall the show is great.  The first Act’s musical numbers are much more memorable as a whole, but “Razzle Dazzle” is the most entertaining number of the show which includes a “three ring circus” right there on the stage.  While Act 1 features better music, Act 2 plays much more for laughs and over the top entertainment.  This makes everything after the intermission just fly by.

“Chicago” is a great show that can be enjoyed by almost anyone.  I think a lot of people will go as a result of their enjoyment of the film.  Just keep in mind that, as I said before, this is a different experience.  The actors create their characters for themselves and don’t try to duplicate anything that is done before.  But all of your favorite numbers from the film are just as fantastic on the stage.