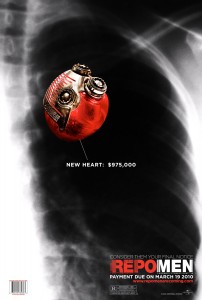 Below are the latest movie posters from “Repo Men,” starring Forest Whitaker and Jude Law. The movie is about a company that is selling artificial organs, which will extend the life of the recipients. The downside is that they come with a hefty price, and if you can’t pay – the “Repo Men” will come and take them back.

If the plot sounds familiar, it might be because you have heard something quite similar not too long ago. The movie “Repo! The Genetic Opera,” released just back in November of 2008, has a very similar premise. “GeneCo, a biotech company that offers organ transplants–for a price. Those who miss their payments are scheduled for repossession and hunted by villainous Repo Men.”

Now, the good part about a movie like this that sounds familiar is that 2008’s ‘Repo!’ was not very good at all. The premise sounded interesting, but the songs were weak – not to mention that the whole thing was pretty weird. Hopefully with some talented actors like Law and Whitaker, these “Repo Men” will be more enjoyable to watch.

Here is the official synopsis for “Repo Men” below:
Humans have extended and improved our lives through highly sophisticated and expensive mechanical organs created by a company called The Union. The dark side of these medical breakthroughs is that if you don’t pay your bill, The Union sends its highly skilled repo men to take back its property… with no concern for your comfort or survival. Remy is one of the best organ repo men in the business. But when he suffers a cardiac failure on the job, he awakens to find himself fitted with the company’s top-of-the-line heart-replacement… as well as a hefty debt. But a side effect of the procedure is that his heart’s no longer in the job. When he can’t make the payments, The Union sends its toughest enforcer, Remy’s former partner Jake, to track him down. Now that the hunter has become the hunted, Remy joins Beth, another debtor who teaches him how to vanish from the system. And as he and Jake embark on a chase across a landscape populated by maniacal friends and foes, one man will become a reluctant champion for thousands on the run.

THE UNION IS COMING!

Check out the viral website for “Repo Men” to see some cool videos about “The Union,” at theunioncares.com.