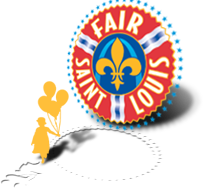 This weekend is the start of the annual Fair St. Louis Festival, one of the largest 4th of July festivals in the country. Every year hundreds of thousands of people flock to the riverfront in St. Louis,  Missouri to see air shows, parades, fireworks, and concerts.  This year John Legend and the B-52’s will be headlining the entertainment. There have been some reports on the internet stating that these shows will be moved, which is not the case.

However, the Live on the Levee shows appear to be moving locations according to a recent press release:

Following extensive consultation with officials from the City of St. Louis, National Park Service and the U.S. Coast Guard, the Fair Saint Louis Foundation today announced the move of its Celebrate Saint Louis Summer Concerts (CSLSC) to Soldiers Memorial Military Museum and surrounding parks (streets will be blocked from Tucker to 14th and from Market to Pine). River levels are expected to remain at flood stage and due to the complex logistics and safety measures taken for guests, the original location on Leonor K. Sullivan Blvd. was determined to be unusable.

Additional details regarding the new location will be made available next week. The Fair Saint Louis Foundation reiterates there will be no changes to its Fair Saint Louis festivities this weekend.

“The current Mississippi River flooding will have no impact on our upcoming Fair Saint Louis 30th Anniversary celebration. All major musical performances are planned for the Budweiser Main Stage, which is directly under the Gateway Arch. We’re looking forward to a fantastic 4th of July weekend,” said Joe Imbs, Chairman of the Fair Saint Louis Foundation. “As St. Louisans we are blessed with the great resource of our Mississippi River, but we have also come to know the challenges it brings. We are equally fortunate to have such a majestic “back-up” location on and around the Soldiers Memorial Military Museum.”

So, you’ll be able to enjoy Fair St. Louis just like any other year, but the Live on the Levee series will have to be enjoyed in another location. Here is the current lineup for the series:

Silversun Pickups with Against Me! and The Henry Clay People opening
Saturday, July 24