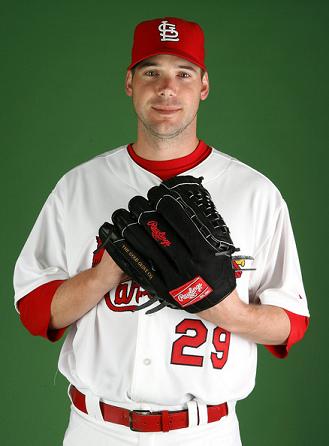 A lot of my friends have been asking me about when Chris Carpenter might be coming back. There have been a few updates recently, but unless you’re scouring the sports pages or reading the Cardinals’ MLB.com site, you probably missed it.

After seeking another specialist last week, Carpenter was diagnosed with thoracic outlet syndrome. I won’t pretend to be a medical specialist, but essentially, excess pressure is being applied to the brachial plexus and/or subclavean vessels.

Carpenter’s been pitching with numbness in his right forearm for the last four years, but his condition’s been exacerbated this season. It’s not a very common problem for ballplayers, but it has happened to other pitchers and players, such as Matt Harrison, Hank Blalock, and David Cone.

Chris now faces the possibility that he may need surgery if he wishes to continue his pitching career. The surgery would require removing his first rib and any other muscle or tissue that might be restricting the nerve and blood flow to his arm. Such a surgery would likely wipe out the rest of his season, although in Harrison’s case, he was throwing bullpen sessions within a month of his surgery. It is possible Carpenter could continue to rehab and come back without surgery, but the likelihood of that appears to be decreasing by the day.

So, what does this bode for the Cardinals? Well, it was the hope of the front office (as well as many fans) that Carpenter’s return in the second half could help alleviate concerns about Lance Lynn’s workload (last year, he threw 109.2 innings, 164 in 2010; many organizations try to restrict annual inning increases to roughly 25-30 to avoid strain on a young pitcher’s arm), but with the uncertainty surrounding Carpenter AND Jaime Garcia, the team will likely consider outside help. Lynn could still be an effective pitcher for the Cardinals, but it’s a possibility he’ll be moved to the bullpen if the team can find some starting help.

Should he stay in the rotation, it’s still a possibility the team will go for outside help in the rotation, as Joe Kelly had not been in the plans to pitch at the major league level this season. Kelly was a closer in college, so the team was stretching his arm out gradually. Currently he’s at 93.2 innings this season; in 2011, he threw 132, 103.1 the season before.

This could also have an impact on the situation next year. Kyle Lohse, who’s been the team’s best starter this year, is a free agent after this season. Ditto Westbrook, who does have a mutual option for next season. With the future of Carpenter and Lohse in flux, it’s possible the team may have to re-up one, if not both, pitchers.

I won’t speculate on who the team might go after if the team becomes buyers within the next four weeks. The reality is, though, that the Cardinals could head into August with a revamped location.