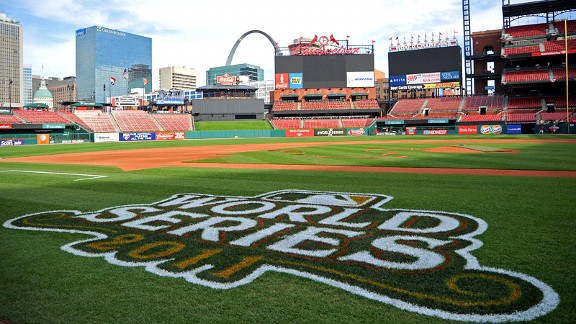 On Friday, manager Mike Matheny made official his opening day roster. He waited until Friday so he could see how the battle for the backup catcher spot played out between Bryan Anderson and Tony Cruz. In the end, Cruz won out because of his prior experience working with the staff and his positional versatility. Having been a former third baseman, he can also play first base and the corner outfield positions.

And with that, the 2012 opening day roster looks like this:

The addition of Robinson was an interesting one, as many people thought Adron Chambers, a late season call-up last year who provided speed on the basepaths, would have a chance. Robinson, however, has a little more pop than Chambers and, although he’s not as fast, might actually be a better baserunner than Chambers. The decision not to place Allen Craig on the opening day roster opened up an additional spot for him.

Komatsu, as I’ve talked about before, was the Rule 5 pick from Washington. He had a solid spring training (.280/.327/.400), and the fact that the team would most likely have to return him to Washington if he didn’t make the team probably played an important factor in his making the team. He’s also got some excellent speed and adds some versatility, being able to play all three outfield positions.

Speaking of speed, watch for this team to be much more aggressive on the basepaths. Last year, the team ranked dead last in stolen bases with 57 while being caught 39 times. Tyler Greene led the team in stolen bases with 11 despite only playing in 58 games. This spring, though, the team’s been much more aggressive on the basepaths, having stolen 26 bases while being caught nine times.

Two position players the team expected to have this season will start off on the disabled list. Skip Schumaker is recuperating from a strained oblique and is eligible to come off the DL as soon as April 10. He will likely take Robinson’s spot on the roster and will serve as a supersub. Allen Craig will become the fourth outfielder and will likely see time in right, left, and at first base.

Pitching-wise, the biggest surprise of the spring (other than Carpenter’s health issues) was the demotion of Eduardo Sanchez to Memphis. Statistically, he had an ok spring (0.00 ERA in 8 innings, 14 strikeouts), but he also walked five batters and hit four. Matheny wants him to return to Memphis to work on shortening his motion and improve his accuracy. It’s likely he’ll be back with the team before long. Linebrink and Romero are both veterans and Romero takes over Arthur Rhodes’ spot as a LOOGY (Lefty One-Out GuY).

The Cardinals just wrapped up a 6-2 win today, bringing their spring training record to 16-8. They play one final game tomorrow against the Nationals, then travel to Springfield for an exhibition before coming back down to Florida for the season opener against Miami Wednesday.