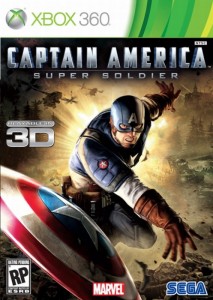 This video game, with noble intentions, will leave excited movie goers looking for something more until the namesake’s film is released.  And that wouldn’t be so bad given the idea behind Captain America, except the game is based within the world of the film and lacks the content of the series.  This includes seeing character Steve Rogers develop from feeble American wannabe soldier into the first avenger.

It’s important to know that you will not follow the story line of the film.  You will be left in a Bavarian mountain castle akin to the Batman game “Arkham Asylum”.  Captain America disappointed me since it felt like it was trying to capitalize on the same game play style of Arkham but without the story.  After battling weapon after weapon; you will quickly discover that you are going to be completely on your own as there are no minor characters save for a random voice of Peggy Carter.

I hate to say it, but this game doesn’t leave me with any desire to replay it.  You never see anything related to the Germans or the Nazis.  Although when exploring the castle it would have been really nice to have seen a few of the infamous Nazi laboratories that I have read about in my history books back in high school.  I know, I know,  it would be in bad taste, but still something to give the character Hydra’s henchmen a reason to be villainous. 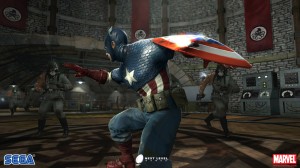 This game suffers from trying to appeal to everyone.  The collectibles and the game intel that you can gather almost make the preface seem muddled and it provides a different game for someone else.  The bottom line here is that it seems as if the developers were on overdrive to get a rating below T for teen and make it appeal to anyone who may remotely like the film.  I think that they should have stuck to one idea and made it more cinematic and story driven instead of what it is; a plastic disc that makes a better coaster than a game.

I wouldn’t waste my money buying this or even renting it for that matter.  Save your money and wait for the game that this was meant to be instead of just trying to expand your collection.  The game hits a target audience of age 10 – 12 and no one above this is going to enjoy it.