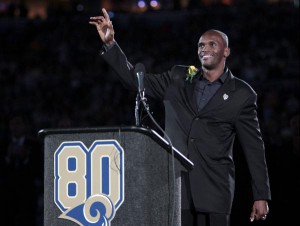 That was all you heard coming out of the Edge on Sunday morning minutes before the St. Louis Rams were to meet the woeful Carolina Panthers. As the crowd piled in early before kickoff to acknowledge the career of one of the finest ever to wear the blue and gold Issac Bruce. The Rams honored one of the best wide receivers ever to sport the horns Sunday with a pre-game ceremony where they retired the #80 that Bruce made a legend. Teammates and former coaches Dick Vermeil and Mad Mike Martz all showed up to share in the joy. Compared to the storied career put up by Bruce, the ceremony was lacking mostly due to the verbally bumbling Steve Savard. Shocking since he makes a living by speaking to the public! But the crowd was there for Issac and they enjoyed the video tributes prior and throughout the game on Sunday. Bruce who has always been the class of the NFL made a victory lap around the “edge” to shake hands with fans.  The only thing left was for Bruce to take the retired jersey and suit up for the home team and show these young players how it is done! Well that didn’t happen, but what did was an inspiration that ignited a team.

The St. Louis Rams defense, inspired by Issac Bruce, came out and demolished the Carolina Panthers by taking the ball away three times and sacking quarterback Matt Moore three times for a total of 23 at the halfway point in the season!  The Rams have one of the Top 10 defenses in the league! 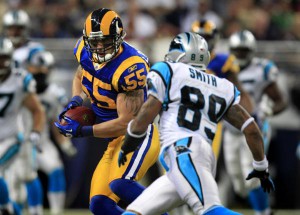 After the Rams took the opening kickoff and went three and out, the defense took the field and wanted to keep the “Dome Field Advantage”! Matt Moore’s first pass on a trick play, the flea flicker, was grossly under-thrown right into the waiting arms of James Laurenitis! The game was a battle of defenses as Carolina wouldn’t let Steven Jackson get any positive yards and the Rams D was tormenting  James Stewart on the other side. 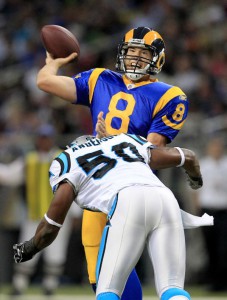 They forgot about this new kid in town Sam Bradford. Bradford who was without any real targets at wide receiver this week (Alexander went down thursday with another knee injury) so was left with a crew of  tightends, Bradon Gibson and saftey valve Danny Amendola. So Sam went to work spreading the ball around and began to move the team through the air against the stingy Carolina defense on a 13 play 7 minute drive that resulted in a 33 yard Josh Brown Field Goal, Rams 3 Panthers 0!

The Rams defense came out to force another Panthers 3 and out only to get the ball back to Bradford and the offense. This time Bradford move the team down the field on another 10 play 6:50 minute drive only to hit Danny Amendola in the endzone for a Ram’s touchdown! The final two minutes of the half had the panthers in hurry up and the Rams defense on their heels as they were able to get the ball down the field far enough for John Kasay to kick a field goal and put Carolina on the board at half, Rams 10 Panthers 3.

In the past the second half meant doom for the Rams as they have not been able to score and had to rely on the defense to hold on for victories. That would not be the case on this Sunday. Following a scoreless third quarter, The Rams took the ball away again when Chris Long recovered a Steve Smith fumble at the Panther 44 yard line, and it took less than 3 minutes for Bradford to find Daniel Fells in the endzone for another Ram’s touchdown!  The Rams turned Moore’s next interception into a 41 yard field goal by Josh Brown and a commanding 20-3 lead. 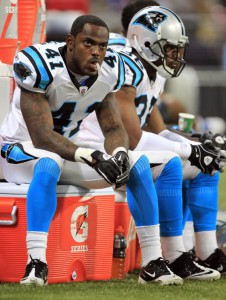 Carolina would get a garbage TD late in the fourth to gain an ounce of respect but would be pushed over “the EDGE” by the Rams 20-10 and limp back south with a record of 1-6. The Rams who now are 4-1 at the EDGE and now 4-4 at the midway point of the season. Are you sitting down? Entering the month of November, your St. Louis Rams are sitting 1/2 game out of first place in the division! The Rams are entering their bye week and look to heal thier aches and pains and possibly interview a receiver or two in the coming days.

Ram Man will also be entering his bye week,a dn I will next check in with you live from the city by the bay in San Francisco California as I travel with the team to the week 10 match up with the 49ers. If they don’t lock me up in Alcatraz, I will be back with all the results and stories from a Rams victory in San Fran!