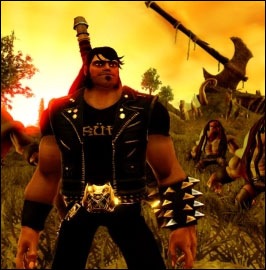 Tim Schafer is a video game creator whose ideas are so original and fun, but never seem to find the right audience. Grim Fandango and Psychonauts were two of the finest games ever released. This one looks to be a critical darling like his other projects, but will it find an audience? This game has a bit more going for it than his previous releases. One, music games are hot right now. You’ll probably have a few people buying this mistaking it for a new Guitar Hero type game. Two, the voice talent is incredible in this. I’m all for Jack Black voicing the main character, and the appearance of heavy metal legends. Let’s hope the game plays well.

Brütal Legend follows the story of Eddie Riggs (voiced by Jack Black and named after Eddie the Head, the mascot of Iron Maiden, and Derek Riggs, the artist who created Eddie), who is the world’s best roadie for the world’s worst “heavy metal” band, Kabbage Boy. The game begins one night during a gig. When the lead guitarist falls from a part of the set, constructed by Riggs, Eddie catches him, but the piece of scenery breaks off and lands on top of Eddie. His blood drips onto his cursed belt buckle, which is really an amulet for Ormagöden, “The Fire Beast, Cremator of the Sky, and Destroyer of the Ancient World”. Ormagöden awakens, kills the members of Kabbage Boy, and transports Eddie into a heavy metal and Nordic fantasy inspired alternate history where demons have enslaved humanity. Eddie comes to learn that the fantasy world was created by a race of ancient Titans who left numerous relics and instructions for the following generations behind for them to use to build upon, but neither humans nor demons could decipher their meanings. Only Eddie, due to his roadie skills, is able to make sense of their meanings and can put the Titans’ wisdom to use. While Eddie is seen as the “chosen one”, it is unclear whether he is the savior or the destroyer of the world.