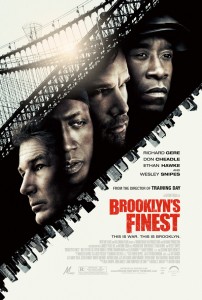 Director Antoine Fuqua looks to recapture the magic of Training Day, his career highpoint, with new film Brooklyn’s Finest.  The film follows three police officers: Eddie (Richard Gere), a beleaguered patrol officer one week from retirement; Tango (Don Cheadle), an undercover officer no longer sure where his loyalties lie and; Sal (Ethan Hawke), a cash-strapped cop trying to provide for his pregnant wife and their numerous (the film is never quite clear) children.  The film tracks the three unconnected officers over the course of a week.  And when I say “unconnected”…sweet baby snow-peas, do I ever mean unconnected.  [morelink]

The characters in the movie don’t so much as cross each other’s path until an hour into the film.  And even then they’re literally crossing paths.  The film’s story is a convoluted, dreary, violent mess in which even the subplots have subplots.  It meanders through a world of moral relativism where the cops are dirty and the drug lords have an ethical standard all their own.  The whole thing is like Crash meets The Wire meets The Departed…only, you know, not good.

The movie’s use of music is almost laughably literal.  Tango is discussing the struggle of being and undercover cop?  How about “The Great Pretender” by The Platters.  A dirty copy is rummage through a crime scene looking to steal drug money?  That’s a great time for Rick Ross’ “Where My Money”.   I was surprised not to hear “Bad Boys” by Inner Circle.

Strong performances are wasted throughout the movie.  It’s almost as if the actors have been duped.  It’s not that any individual story isn’t interesting on some level.  But since none the connect until late into the film, the movie is more akin to channel surfing between episodes of Law & Order, Law & Order: Criminal Intent and Law & Order: SVU.