Book Review: ‘The Throne of Fire’ by Rick Riordan 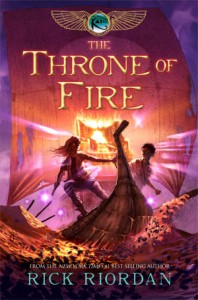 The Throne of Fire is the second installment to The Kane Chronicles.  Carter and Sadie Kane are back again on another mission to save the world. This time they must stop Apophis, the chaos snake, from rising out of its prison to devour the earth. To do this, they must find Ra, the sun god, and bring him back to his throne as king. Finding Ra will not be easy since he “retired” many years ago because he was becoming senile and no one has seen him.

Carter and Sadie learn that to revive Ra they must search for the Book of Ra, which has been separated into three pieces and hid around the world. To help with their journey, Carter and Sadie have recruited new trainees to learn the magic of the Egyptian gods. Jaz is a healer that follows the path of Sekhmet, the goddess of war, battles, and lions. Walt is a charm maker who is descendant from Akhenaten, who was a pharaoh that was cursed by the gods.  They also get help from Bes, the Egyptian god of dwarves.

Of course, the path to find these pieces will not be easy. The House of Life is still hunting down the Kanes. It has the help of a magician named Vladimir Menshikov, who has evil plans of his own.  Also, some of the gods are not happy about Ra being raised, so they try to stop the Kanes.  With an attack on their home and the trainees looming, plus only a limited amount of time before Apophis rises, Carter and Sadie must work quickly and try not to get killed. Which may be easier said than done.

Again, Rick Riordan does a fantastic job of bringing the Egyptian gods and mythology to life.  He has a smooth writing style and makes it very easy for the reader to get lost in the story. Some days the time just slipped away and I found myself reading for many hours, just lost in the lives of Carter and Sadie. I cannot wait for the next book, which doesn’t come out until spring 2012.

The Throne of Fire gets an A.