Bill Clinton Gets Cameo in “The Hangover 2” 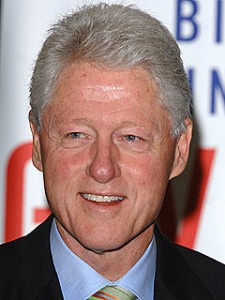 If you were to ask me what type of narrative film former US President Bill Clinton would make his debut in, I certainly wouldn’t pick the sequel of a film that had a gag where a man uses a baby as a masturbation joke. Although, to be fair The Hangover is now becoming quite famous for its cameos. First, we have the fact that the first film resurrected Mike Tyson’s career to a point it hadn’t been in over a decade. The latest debacle was over the hiring and subsequent firing of the currently in the hot seat actor, Mel Gibson, who was later replaced by the much safer choice, Liam Neeson.

Chalk this one up to being at the right place at the right time. Clinton was overseas in Bangkok, Thailand delivering a speech about clean energy, and decided to use a bit of his free time in a cameo for Todd Phillips followup to the smash hit, The Hangover. So far there is no indication on what his cameo entails, but is sure to make a lot of press when the film hits theaters in May of 2011.

This is just another reason for Clinton’s fans to love him, and another reason for his critics to hate him. Some might be offended by someone of his standing in politics being in a movie which is largely populated by toilet humor, but I think it shows a great sense of fun in a former president, and I for one can’t wait to see the cameo.

Let us know what you think in the comments below.