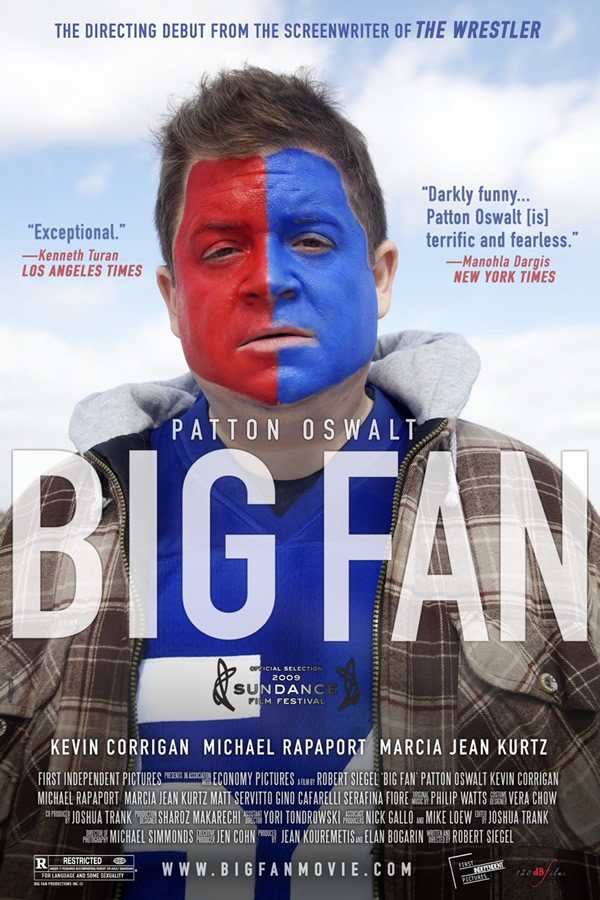 Robert Siegel makes his feature debut with a low budget dark comedy that is an interesting character study of what someone might do for the team they love if taken to the extreme, but might have needed a different direction for the lead to make it more convincing.

Paul is a New York Giants fan. You could even argue that he is one of the most diehard fans there are. Calling into the local late night sports radio talk show, so well known the producer pushes him in front of callers so the people can hear his thoughts; which he writes out ahead of time while working. He has an ongoing back and forth with an Eagles fan, Philadelphia Phil, which calls the New York stations to harass the Giants fans as their teams’ race for the playoffs. Unfortunately for Paul, his minor celebrity as a repeat talk show guest does not help his station in life. Paul’s current situation includes living with his mom, being pitied by his siblings, and working in a dead end job as a parking garage attendant doesn’t seem like the greatest way to carry on one’s life. With that said, he seems content and happy supporting his Giants from the parking lot at home games with his buddy Sal and worshiping his favorite player Quantrell Bishop. When Paul and Sal happen to see Bishop at their local gas station the decide to follow him to try and see what he does and maybe meet him only to have things go nowhere near as planned.

Now, I enjoy Patton Oswalt a lot and he is very good in this movie, but I can’t help but feel that if they went a little bit more intense with his character Paul this movie could have been funnier and more successful. Now, I am not calling for a clichéd over the top super fan, and I appreciate them showing some reserve, but I just feel like he needed to be a step or two towards that extreme more than he was. Paul is just a little to laid back and easy going to feel like he is as big a fan as he is supposed to be. Oswalt’s Paul is very good though and we clearly get that he is supposed to be a huge fan, but I think the extremes the film goes to in the characters decisions would have been helped by having the character be a tad more extreme himself. And while this makes things a bit more of a stretch, it doesn’t ruin the movie by any means.

The second half of the film is full of a lot of decisions by Paul that many of you will no t buy into, I can guarantee that. I had even some trouble accepting his actions; in fact I still don’t buy at all the climactic scene for Paul in the film. Though the final scene of the film is just about perfect for the premise and sells us on just how die hard he is more than his calm demeanor and support of the team. Though, Siegel had a fine line to walk with making the film believable or absurd and I will say I am glad he kept it more to the real then dancing on the extreme. We all have met guys like Paul before I just don’t know if Paul is capable of what he actually does in the film.

As I mentioned before, Patton Oswalt does a very fine job here and is impressive in his ability to single handedly carry the film on his back. He stays quite reserved compared to some of his explosions on stage and creates a sad character out of one that is actually happy which makes it even sadder. The rest of the cast are very one note and are there simply to prod Paul in a certain direction, but the cast that rounds out these parts are good, especially for almost an entire group of unknowns.

In the end, Big Fan is an interesting character study that supplies some laughs but might have you scratching your head. Well paced and performed by Siegel and Oswalt, I can’t help but think the film could have been that much better with a bit different direction for Paul that I know Oswalt is capable of playing. With all this said, it is a nice little independent effort that feels like it came from the same world as Siegel’s previous film The Wrestler (he wrote it). A gritty and realistic look at a man’s life that will serve as a fine and sad little character study and an interesting spin on a sports film that will find an audience that enjoys it, but won’t be blowing people away any time soon.