“Beauty and the Beast” Plays December 20-24 at the Fabulous Fox! Interview with “LeFou” Actor Andrew Kruep 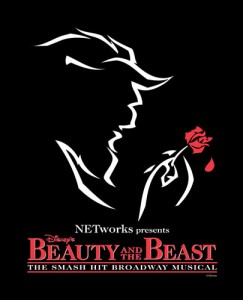 Andrew Kruep is both thrilled and grateful to make his national tour debut! Favorite regional credits include Big River (Huck), The 25th Annual Putnam County Spelling Bee (Chip), West Side Story (Baby John), The Drowsy Chaperone (Ensemble), Hair (Tribe), and White Christmas (Ensemble). Thank you to my friends and family for all their love and support!

Andrew, who plays Lefou in the national tour of Beauty and the Beast is from Belleville, IL and has performed in many shows at The Muny and Stages. We spoke to him about growing up in the area, and how we became a part of the tour.

Kevin: It’s always great to see local actors in national tours. How did you get into acting? 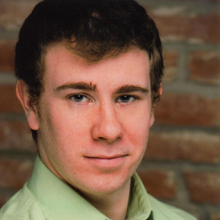 Andrew: I was very lucky growing up, because my parents put me in almost every activity they could, including acting. I started acting, singing, and dancing when I was young, mostly because my sister was involved with theatres in the area as well.

Kevin: Did you study theater in high school / college?

Andrew: I was very involved with the theatre and speech department in high school. My senior year I was a Speech Team Captain, a Thespian, and the President of our Little Theatre group. Even though I loved being in plays and musicals, I didn’t fully think of it as a career until I went to college. I entered college as a secondary English education major, and was cast in the first show of the season for the theatre department. Before the end of my freshman year, I switched my major to a BFA in Musical Theatre!

Kevin: I saw that you have played the Muny, as well as Stages. What have some of your favorite shows been?

Andrew: My first show at the Muny was The Wizard of Oz in 1997. I will always remember being in the lollipop guild and performing in front of all of those people for the first time! I enjoyed every show I did there (’97-’03), but that will always stick out in my mind, because it was the first. I also have enjoyed every experience I’ve had at Stages. I’ve been lucky enough to be a part of two seasons there, and I think my favorite show was The Drowsy Chaperone. Every person involved with that show was a perfect fit. From the cast and technicians, to the creative team, it was a fantastic show. I don’t think I’ve ever laughed so hard every day in a rehearsal process as I did for that show!

Kevin: How did you get involved with ‘Beauty and the Beast’ and the national tour?

Andrew: I initially auditioned for Beauty and the Beast at a call in Chicago in the summer of 2009. I got a callback a few days later, but couldn’t attend it, because I had started rehearsals for Guys and Dolls at Stages. So they kept my headshot on file for the show, and I didn’t hear anything until the fall of 2010, when I was invited to another New York callback. I drove up from Virginia, where I was doing 42nd Street at the time, and did the callback. I was then hired to be in the ensemble, and then I became the permanent LeFou! 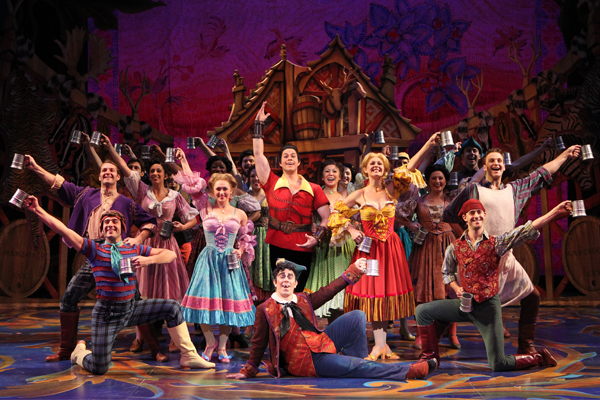 Logan Denninghoff as Gaston and the National Tour Cast. Photo by Joan Marcus

Kevin: Are you a fan of the Disney movie, and how does it relate to the musical?

Andrew: I grew up with the Disney movie, and I’m still a fan of it today! The musical is very similar to the movie, however the fact that it is a live theatrical production makes it a much different experience to be a part of. All of the special effects, dancing spoons and forks, and clinking tavern mugs in unison are happening live in front of you!

Kevin: Do they use some of the same songs in the show as the movie, and how do they differ if so?

Andrew: Disney’s Beauty and the Beast features the same Academy Award winning songs from Alan Menken and Howard Ashman, but also has additional songs written by Alan Menken and Tim Rice. If you come see the musical, you’ll hear all of your favorites, including “Be Our Guest” and the beautiful title song, “Beauty and the Beast,” plus more brand new songs that are not in the movie!

Kevin: Your character, LeFou, is definitely one of the funniest parts of the animated film. How does the character translate to the live show, and how does the role differ?

Andrew: LeFou is definitely a clownish buffoon in the movie. He tumbles, falls, and gets punched around every corner. The character is the same in the live show, but the element of performing it live on stage is much different than watching the movie. There’s a lot of choreography in each fall and punch, but my job is to make it look effortless. When people ask me if I have bruises all over, I say that it was all choreographed, and I take it as a compliment that I must be doing something right!

Kevin: Do you feel like you channeled the cartoon character for the role, or did you try to create your own version?

Andrew: I think it’s a mixture of both. Every character is so iconic in the movie that people want to see that when they come see the show. However, after doing so many performances of Beauty and the Beast, LeFou has become such a part of me, and there is certainly a lot of “me” in my performance of the character.

Kevin: What is it like working with the cast of ‘Beauty and the Beast’?

Andrew: We have a wonderful cast of actors, singers, and dancers in our show. I’m very privileged that I get to share the stage with each and every one of them night after night. We all work, travel, live, and relax together every day so we get to know each other pretty well, and can always be there for each other throughout tour life. 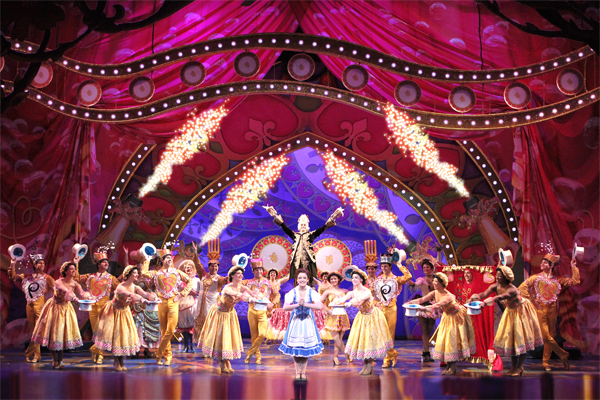 National Tour Cast in Be our Guest. Photo by Joan Marcus

Kevin: How long did you prepare for the role, and how long will the tour last?

Andrew: I performed in the ensemble of Beauty and the Beast for a month before I stepped into the role of LeFou. I was given a week to learn the entire show from the creative team on tour, and then I was put into performances. While I was performing in the ensemble, I also had to learn LeFou’s lines, choreography, and blocking. After a month in the ensemble, I had a two-hour “put in” rehearsal with the cast and I was on for LeFou that night! The tour has been out since January of 2010 and will continue for a few years yet.

Kevin: What makes this show different than the others you have been a part of, and what are some of your favorite things?

Andrew: I have never toured before, so for me that is the biggest difference between this job and any other I’ve ever had. Traveling all over has allowed me to visit places and see things that I probably wouldn’t have been able to without this amazing opportunity. Also, being able to work with the original creators of the Broadway production has been something that I’ll never forget. They came together to bring Disney’s Beauty and the Beast back out on tour, and it’s been a pleasure to work with all of them. Lastly, I think my favorite thing about my experience with this show is that I get to perform for all of my friends and family in St. Louis for Christmas. I’m so grateful that I get to be home for the holidays and show everyone what I’ve been up to for the past year!

Kevin: I’m sure you have been to the Fox Theatre before, but is this your first show performing there?

Andrew: Yes, this is my first time performing at the Fox Theatre. I have seen so many tours come through the Fox when I was growing up, and it is a dream come true that I get to perform on that stage!

Kevin: What hobbies do you have outside of acting?

Andrew: Since joining tour, I’ve been making many videos on my computer. I love to make voice over and musical theatre audition reels for my friends, and funny videos for the cast.

Kevin: Do you have any plans for shows after the tour is finished?

Andrew: After my time with the show is up, I will be moving to New York City and will be pursuing more jobs in the world of musical theatre. I have no clue what show I’ll be doing next, but I’m excited to find out!