Assassination of a High School President 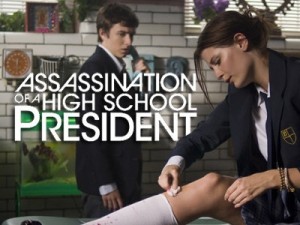 Assassination of a High School President has gone through a long process to get to the masses, a Sundance 08 film that received a decent amount of praise and deemed marketable has finally hit DVD almost two years later and I don’t know why it took so long.

The film follows a sophomore student, Bobby Funke, who is trying to make a name for himself in the school newspaper world.  When he discovers the high school’s president, Paul Moore, was behind the disappearance of the school’s recent SAT’s he gets a story that not only makes his newspaper career, but gets him noticed, and the hottest girl in town.  But after a few encounters with the Moore, Funke begins to doubt his reporting and he begins to unravel a darker conspiracy to it all.

Now this all sounds a bit silly, and it might be, but the film understands it is a bit of a farce while remaining darkly humorous.  And the dark humor is very good and rivals some of the best high school dark comedies out there.  Smart and mischievous most of the time the dialogue is well written and the plot and pacing were quite good, if a tad unoriginal.  Comparisons to Brick will be quick to mind, but I think it keeps itself different enough in that it is more investigation journalism rather than a detective story; and this film is a tad less dark and not as stylish.

The film might not blow you away, but it will keep a steady grin on your face with a couple of great laughs along the way.  Though I must say that I found the players in the twists to be a tad predictable, but the motives of the individuals was actually pretty clever and thought out.  There is a broad variety of characters and types to be found, but for every type, there is a fairly original character you would find in a high school that you don’t really get to see all that often in film.

It’s a shame this film wasn’t ever really given a real chance in theaters outside a couple festivals as the film is a solid high school black comedy.  Though I can see it as being tough to market without many familiar faces and it seems to have been destined to hopefully find a cult following on DVD like many high school black comedies seem to do.

The actors in the film all do a pretty good job as well, with Reece Thompson as Funke doing a fine job of carrying the picture on his shoulders.  Very funny and the perfect attitude to the part, Thompson makes Funke likeable yet laughable and is one of the better high school characters in recent memory.  Bruce Willis is hilarious in his brief appearances as an inappropriate principal, spouting curses and possibly physically harming students.  Mischa Barton is cute and decent as the love interest and takes her top off as usual, but doesn’t elevate role much beyond that.  The rest of the cast is made up of a bunch of unfamiliar faces but create a number of fun characters to surround Thompson and provide laughs along the way.

In the end, Assassination of a High School President is a solid black teen comedy with an engaging plot and a bit of mystery.  While not terribly original in its style, its characters are fresh, the humor works most of the time, and you will be entertained from pretty much start to finish.  While the film is not breaking ground for the genre it is a solid entry that falls below Brick and Donnie Darko but is better than most of the high school movies of the decade.  If you like the genre, seek this one out as it is an interesting spin and entertaining high school dark comedy that deserves to be discovered.

Assassination of a High School President is a B