Recent data from comScore shows that Apple has now overtaken RIM for the first time to claim the #2 spot in U.S. smartphone market share. April 2011 is also the highest market share ever recorded for Apple with 26.0% of all smartphone owners in the United States having an iPhone as their handset of choice. Google’s Android operating system still holds the majority market share with 36.4% of all smartphones, at a steady increase of about 1.7% every month over the past three months. 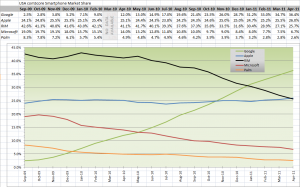 Blackberry is a sinking ship, Microsoft has yet to actually gain market share since Oct 2009, and Palm has lost half of its subscriber base in the past 12 months.

Looking at total mobile sales for both smart- and dumb-phones, Samsung commands a leading 24.5% of all phones sold in the United States, with LG and Motorola evenly spaced below Samsung at 20.9% and 15.6% respectively. In comparison, Apple is currently selling just two handsets to pull in 8.3% of all mobile subscribers. The cheaper of the two, the iPhone 3GS, has a current price of $50. Even with this amazing deal, Apple seems to be missing out on a slice of the mobile market. Although, “missing” may be the wrong description: Apple is now worth more than Microsoft and Intel combined.

This is all great PR leading up to Apple’s WWDC event today (noon for us St. Louisans), which is sure to bring more excitement to the table with announcements about the upcoming iCloud service, a look at the next version of iOS, as well as their latest update of the Mac OS X desktop OS.