Another Take By Zac: Film Review: The Kids Are All Right 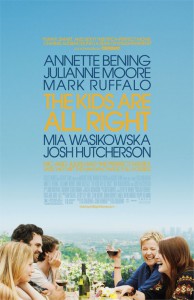 The Kids Are All Right is a unique and funny dramedy that is driven by its excellent acting on all fronts.

Following a pair of siblings born from the same sperm donor but were each birthed by their separate moms, we pick up just after the oldest, Joni, has turned 18 and can legally request to meet her donor.  Joni is hesitant but agrees at the insistence of her brother, Laser, who wishes to meet his father as he has missed out on that relationship his whole life.  Enter Paul, Nic and Jules’ (Joni and Laser’s moms, respective) sperm donor.  Paul owns a restaurant, is all about being “local”, and has a very laid back feeling on the world.  Paul quickly becomes anxious to be a part of his kids’ lives and Joni and Laser’s feelings are mutual before Joni heads off to college. Tensions arise though as Nic has a hard time letting Paul into her family’s life, while Jules and Paul fall a bit easier into step.

The film is a tad predictable but the scenario, clearly as you can see above, is something we haven’t really seen in a film.  The film’s subject matter is, sadly, still a bit taboo (even in this day and age) for some people but is never treated that way.  We are quickly introduced to this well rounded and loving family and the film, thankfully, never stops itself to say, “Look, Lesbians!”  That isn’t what this film is about, so anyone hoping for some lesbian lovemaking you will be sorely disappointed. (There is a good amount of man on man action though, used to excellent comic effect.)  The film is about a nice family dealing with its children trying to find their own paths when a wrench is thrown into the mix.

Ruffalo plays that wrench to perfection in Paul as he is instantly likable and you can never really get upset with the guy as he sort of forces, even if he was invited, himself into this family’s life.  Annette Bening’s Nic is rightfully guarded as the mother hen of the house hold, but again you can easily see why she makes an easy enemy of the ones she loves.  Bening owns a many silent glares Nic casts upon those around her and I applaud her effort; even if she is playing a bit less cold and more realistic version of her American Beauty character.  Julianne Moore is also an easy standout as the hippy-ish Jules who is laid back and a bit of a dope at times.  But Moore walks the line perfectly, making Jules’ dopiness part of her charm while still showing that she is a smart individual; just prone to dumb decisions.

The kids are more than alright (sorry, that was awful) as Mia Wasikowska proves she can act after her dreadfully dull turn in Alice in Wonderland this year.  As Joni, Wasikowska creates a believable sharp witted high school grad ready to move on to college while struggling with her mother’s short leash.  Equally good is Josh Hutcherson as Laser and he really gets to shine when his moms confront him about a sensitive subject.

While the acting is superb and the humor is wonderful throughout, it is the tense, quiet, moments that I remember the most.  A dinner scene at Paul’s house later in the film is worth the price of admission alone and is one of the finer scenes of the year.  The sex in the film is also handled extremely well in that it is both hot, believable, and played for some good humor.  I do wish we got a bit more closure surrounding Paul though in the end; minor quibble.

In the end, The Kids Are All Right is a fine indie dramedy that almost anyone should be able to relate too.  A refreshing spin on the family focused dramedy has enough familiar struggles for people to latch on to and the film will shock you on more than one occasion.  You can’t ask for finer acting in a film and it is a fine mainstream coming out party (no pun intended) for director Lisa Cholodenko who has long dabbled with some quality television programs.  If you are looking for a fresh, funny, and affecting film this summer and you are tired of the big blockbuster affairs look no further than The Kids Are All Right.

The Kids Are All Right is an A-