Another Take By Zac: Film Review: Something Borrowed 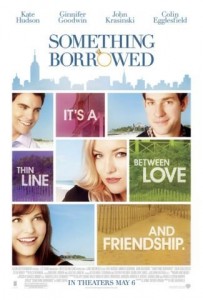 Something Borrowed is an abomination of a film that might look okay and feature competent acting; it’s just that they are trapped in a horrendous story filled with unlikable characters and completely unbelievable plot developments.

The plot follows Rachel whose best friend, Darcy, is getting married to Rachel’s old crush, Dex.  Rachel and Dex were study buddies back in law school and Darcy swooped in and started dating him after Rachel gave her the green light.  Guess what happens next?

To discuss the plot further would be an insult to our intelligence and just as much of a waste of time.  Do not see this film.  I can’t warn you enough how much you will regret seeing this picture.  I don’t care how charming you think John Krasinski is, or how cute Ginnifer Goodwin looks, the movie isn’t with it.  The actors all play their characters fine it’s just that they are either unredeemable or make decisions that their characters would never make if they had a somewhat sensible brain.  Believing Darcy and Rachel are best friends is an incomprehensible task as Darcy is one of the vilest and unlikable human beings put up on the big screen.  I have seen more friendliness and compassion in serial killers then Darcy has for Rachel in this film.  It is a constant look at me, you wish you were me, I am better than you attitude directed at Rachel from Darcy that you can’t possibly believe Rachel would put up with year after year.

To make it worse, Rachel has another male best friend, Ethan, who has been around just as long as Darcy who sees all these awful things she does. Ethan tells Rachel how awful Darcy is all the time, but for some reason Rachel never puts it all together and abandons their friendship years ago.  It is just lazy, stupid, and awful story telling that can’t be defended on any level.

The actors in the film put in fine enough work in what they are given, they are just given nothing to work with.  Krasinski gets the most to work with and provides most of the bearable moments in the film.  Though it’s a bummer he continues to get typecast as basically Jim from the office.  Ginnifer Goodwin is undeniably cute and has chemistry with Dex but we have seen her in this role before.  Colin Egglesfield is a dead ringer for a young Tom Cruise and he is quite as charming as well.  He bounces well off Goodwin, and is very easy on the eyes for the ladies, and I enjoyed his work here and wouldn’t mind seeing him again; as this is the first thing I have ever seen him in.  Kate Hudson had the unfortunate pleasure of playing Darcy, but she must have done a fine job I guess because I hated the character.  The only great moment of the film comes when Hudson and Goodwin show off their dancing skills; but you can catch that clip on the internet so still don’t bother to see the film.

In the end, Something Borrowed is a complete waste of time.  The film insults viewer’s intelligence, it makes women look like they can only be either weak or psychotic, and has a plot that is just laughable at times.  It has all the clichés of you would expect from the genre and the only surprise makes us feel awful for Ethan and makes no sense for the character.  Fans of the book should probably just stick to the written word as apparently they butchered the adaptation and if you loved the novel I imagine the film will only diminish that love.  Again, do not see this film.

Something Borrowed is an F