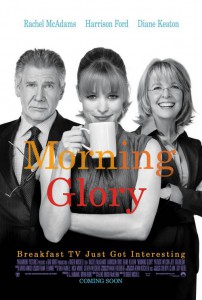 Morning Glory is a funny (if a tad uninspired) tale about the rejuvenating of a morning news show that does fairly well till a perplexing third act almost ruins a potentially very fine piece of entertainment.

Now if I was a well versed critic I would probably start by writing this film off as paling in comparison to such classic “news” movies, like Network or Broadcast News, but I haven’t seen those movies so just know that going forward.  Morning Glory follows a young and aspiring producer, Becky, who thinks she is about to get her big break at a local New Jersey affiliate when she is fired instead of being promoted.  Scrambling for a job, Becky, talks her way into the executive producer job at the number four morning show in the country.  The show, DayBreak, is struggling and at risk of folding so Becky recruits an off the air, but under contract, legend at the station, Mike Pomeroy, who is getting paid to do nothing. Grumpy and difficult, Pomeroy, is awkwardly thrown into this morning mix as Becky tries to get him and the ratings to boost.

The films first 2/3 are formulaic, predictable, but solidly written with plenty of humor along the way.  Watching Becky come into her own and show off her skills is both impressive and entertaining and she serves as a strong lead for the story.  Rachel McAdams stars in the lead role and she creates a spazzy, yet sharp and confident character that is easy to like a root for.  The characterization isn’t anything wildly original for a female lead, but McAdams does a great job and goes beyond the limits of the character.

She is surrounded by a strong supporting cast as well, most noticeably Harrison Ford and Diane Keaton.  Keaton’s fun and gets to be a bit wacky here but unfortunately her character doesn’t get a whole lot to do.  She does bounce incredibly well off of Ford though and the two have some great negative chemistry when together.  Ford on the other hand throws on a gravely voice and is mean and hilarious as “the talent.”  Ford is full of great one liners and it is great to see him shine in on screen.  Ty Burrell is hilarious in his brief appearances but Jeff Goldblum rarely gets to shine in a severely limited role.  Patrick Wilson is as charming as ever and while he doesn’t get much to do he makes the most of it like Keaton.  Matt Malloy is also brilliant with his physical comedy presence in his crazy bits as the weatherman on the scene.

I enjoyed the movie a great deal up until the films third act when things all of a sudden rush forward, everything happens just because, and it feels like large scenes of character progression are just missing.  I mean it moves quickly and the humor is still there, but thematically it is just kind of a mess.  The fact that I still enjoyed it couldn’t overshadow the structural shortcomings and it really feels like some studio interference to get this thing towards an ending as soon as possible.  The pacing of the film was steady and never felt rushed for the first 2/3 or so and I would have been more than happy to keep that pace and have a bit longer and more fulfilling ending.  Oh well.

In the end, Morning Glory is a funny film that has a little bit of everything in it.  A simple romance, a nice bit of professional relationship drama, broad comedy bits, and even some inventive directing but that third act really is quite perplexing.  I can’t imagine the stuff that seems to be cut couldn’t have been all that awful, or maybe they just didn’t know how to end the picture.  Regardless of the rushed third act the film still remains quite enjoyable and has a couple of great lead performances from McAdams and Ford.  A solid effort that will confuse some but most will excuse its short comings and just enjoy the fun of the film.

Morning Glory is a B-