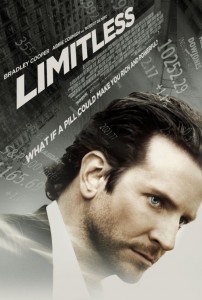 Neil Burger’s film follows Eddie Morra who is a struggling writer, recently dumped by his girlfriend, and has no signs of forward growth anywhere in the near or distant future.  When he bumps into his ex-wife’s brother they grab a drink and his ex-in-law gives him a pharmaceutical drug to try that isn’t quite on the market.  Eddie takes the drug and his mind and motivation opens up to reveal his true potential.  Wanting more, Eddie finds that having the drug gets him into a lot of sticky situations.  His intellectual high and life will both come under risk in an attempt to posses it.

Burger’s film will throw a number of visual flourishes at you that I haven’t really seen before.  The film’s first half especially is just full of interesting shots, cool camera tricks, and added visual cues that try and emphasis what it is like to be on the drug.  The idea behind the drug is clever and there are a number of very cool bits sprinkled throughout the film.  But for every cool bit, there is one that feels like it could have been executed better.  The film is self aware of some of the absurdity it throws at you and encourages the viewer to sit back and just enjoy the ride.

If you sit back and start thinking about things then you will surely be able to find some strings to pull at that will lead to some of the film unraveling but I was ok with that here.  If the film really tried to create an extremely tight and contorted  plot the material would have allowed for that and the film could have leaped to another level, but it seems content being what it is; a good time.  And there is nothing wrong with that, because it succeeds soundly, I just feel like the subject matter wasn’t taken nearly advantage of to its fullest potential; which is disappointing.  The film’s final moment is also entirely perplexing and seemed to be hinting at something but I have no clue whatsoever what that might be, let me know if you figure it out.

Bradley Cooper is great in the film though and is a likable and charismatic lead that the film demands.  It isn’t hard to make B.C. look cool and the film’s middle chunk is almost a look at how awesome I can be montage of sorts as Eddie discovers the potential of his new found academic prowess.  It’s actually kind of amazing that you can make a movie about a guy who can become really smart so cool.  The supporting cast has its ups and alrights.  Abbie Cornish plays the ex-girlfriend and her and Cooper’s relationship is never really fleshed out or explored to any depth, which is unfortunate for Cornish.  She gets little to do and her character disappears unless she becomes necessary to move the plot forward.  Andrew Howard has a lot of fun playing a Russian mob type and gets some of the best comedic moments in the film on top of being rather fun and nasty character.  Robert De Niro is adequate in his role as well, but again like Cornish, doesn’t get all that much to do.  Anna Friel makes the most of her limited screen time and Burger does a great job of using her beauty to excellent affect.

In the end, Limitless is a fun time at the movies but not one that can’t wait till video.  Its visual flourishes, excellent pacing, and great lead turn by Bradley Cooper make it more than worth watching.  I just can’t help but think that the film missed its full potential.  A nice little thriller that excels in certain areas while comfortably staying in its lane in others, those interested are unlikely to be disappointed; just don’t think about what it could have been or what it all means.

Limitless is a B