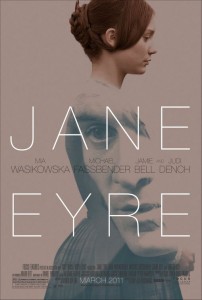 Cary Fukunaga’s Jane Eyre is a beautifully crafted and well executed film whose subject matter will resonate wonderfully with fans of the genre and even entertain many that don’t sit so well with classic English romances.

The film follows the title character from her privileged but torturous beginnings in a wealthy relatives care before moving on to a violent boarding school and finally ending up in the home of Mr. Rochester.  Jane is set up in Rochester’s home, which he rarely visits, to be the governess for Rochester’s young French ward Adele.  When Rochester finally arrives to the story he and Jane begin to form an unlikely friendship and Jane’s feelings are sent spinning as she tries to figure out how to handle her growing attraction for a rich man who is actively courting another woman.  Added to all of this, strange instances have always surrounded Jane Eyre and while in the Rochester home a number of odd events arise.

First and foremost, Fukunaga’s film is technically superb and stunning to look at.  The score is marvelous, the cinematography beautiful using almost entirely natural light, and the actors are across the board fantastic.  Fukunaga is one to watch out for as this is only his second feature film and his technical hand has improved her from Sin Nombre.  Sadly, this film didn’t engross me nearly as much as Sin Nombre did but I don’t think that is at any fault of Fukunaga and his team.  The film is about as engaging as the source material could probably ever be to me but I was never sucked in by the deliberate pacing and story unfolding.

It is again no fault of Fukunaga and the actors, I think it more stems from my hope that the film would have had more of a suspense and horror twist to it than it did.  Fukunaga nails the scenes that he goes for suspense with ease, affectively creating some very tense moments using the dark reality of the times to full effect, but there are only a couple of moments sprinkled along the way.  I think the viewer had a right to expect more as well as there is a scene very early on that has a very deliberate supernatural effect that is never alluded to again.  Jane hears voices at times as well and that isn’t full explored either.  I did like how the events at the Rochester house were resolved but again I wish they had mixed in one or two more beats surrounding the situation.  My disappointment with the lack of suspense doesn’t mean it didn’t help elevate the film’s material though, as I think these moments made the film far more enjoyable for a non-fan of the genre.

The actors in the film are quite great though and the film really jumps to another level when Michael Fassbender shows up as Rochester.  He is cunning, handsome, kind of a jerk, but you can’t help but be mesmerized in him.  You can see why Jane would fall for such a commanding individual as Fassbender continues to show that he is one of the best working actors around right now.  This is not to take anything away from Mia Wasikowska who delivers another great turn as the title character and she has no problem shouldering the wait of the film on her shoulders.  She creates a confident and powerful female lead that we rarely see from this era of history on film.  Jamie Bell pops up in the latter parts of the film and works wonderfully as a symbol of inherent male oppression of the times that allows for Jane to solidify her individuality.  Sally Hawkins is memorable in her brief few scenes but that is to be expected from her nowadays.  Judi Dench is likable and fine as always as Mrs. Fairfax, Rochester’s head caretaker, and she and Wasikowska work wonderfully together.  Also turning in some memorable work is Romy Settbon Moore as Adele, Jane’s student, as she makes the most of every time she graces the screen.

In the end, Jane Eyre is a fine picture that will likely mesmerize fans of the genre.  The film is a technical marvel and Fukunaga continues to solidify himself as one of the strongest young directors working today.  His cast is wonderful and while the film didn’t resonate with me like it will with its target demographic I still quite enjoyed the show.  I look forward to seeing it again down the road (my girlfriend was a big fan) as the visual treats and acting are more than worth the price of admission regardless of your engagement in the story.

Jane Eyre is a B-