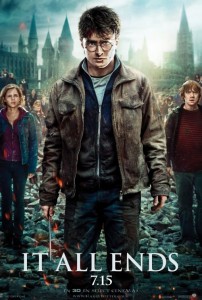 The Deathly Hallows: Part II is an exciting, heart pumping, and near perfect finale to the Harry Potter series.

We last left our heroes as they escaped Malfoy Manor and our villain had acquired the Elder Wand, one of three Deathly Hallows.  Harry, Hermione, and Ron pick right back up where they left off, on the trail for Voldemort’s Horcruxes, and they have a lead on the possible location of the fourth.  Meanwhile, Snape is headmaster at Hogwarts and Voldemort may be realizing the fate of his Horcruxes.

The film opens with a couple scenes of exposition and then basically hits the ground running.  The pacing is fantastic and the film rarely gives you a chance to breath.  Those complaining about the ‘aimless’ camping scenes in Part I will have nothing to really latch on to here.  Besides a brief detour at Gringotts, most of the films action takes place at Hogwarts.  And when I say action, I mean action.  The film is basically a giant fight with only a couple minutes to compose yourself in between scenes.

The Battle of Hogwarts is wonderfully realized and even makes some improvements on the book by extending to some action not seen in the book.  The setting of defenses, the fight itself, the death eaters assault all work spectacularly and David Yates and team are even able to sprinkle in some humor.

The film nails it as an adaptation as well by cutting little and realizing most of the big moments about as good as I imagined.  Even when they depart from the book all the changes are in line and work with the original text.  They are even able to pull off the Kings Cross scene with seemingly ease.  Snape’s memories are also done brilliantly and serve as one of the highlights of the series for me.  The extension/changes to the final battle are all pluses in my book as well and I think they did a great job making the final showdown more epic and expansive between Harry and Voldemort.  There were a number of moments I was expecting to be tough to handle as an adaptation and Yates and his team pull it off.

Book lovers will find a couple quibbles here and there, but for the most part nothing essential is missed.  Relocating the infamous scene in the shrieking shack, changes to the fate of Harry’s wand, Dumbeldore’s extended history, and a lack of acknowledging Hagrid’s actions in the book will be the biggest red flags for book lovers.  Oh, also, they didn’t bring Peter Pettigrew back so I guess Dobby took care of him with that spell.  A shame we didn’t see his redemption and Voldemort’s hand do its work.  Wormtail’s fate and the bit around Harry’s wand was the only thing I really missed.

The actors are great here as well from top to bottom.  Ralph Fiennes and Alan Rickman get the best material and turn in the best performances, with Matthew Lewis nailing his big moment as well.  The story only allows for most of the supporting characters to have nothing but moments, but so much is happening it doesn’t feel like neglect.  Ciarán Hinds and Kelly Macdonald are the two newcomers to the cast and they both nail their small roles in the story.

In the end, Harry Potter and the Deathly Hallows: Part II is a fantastic finale to the series that will play wonderfully with it’s counterpart from here on out.  The film is an action packed spectacle to Part I’s slower build up and I can’t wait to see them play as one (I actually already am as this posts at midnight).  The Deathly Hallows is a contender for the best film in the series and this experience is one of the best you will find in theaters this year; as the series will live as one of the all time greats in cinema history.

Harry Potter and the Deathly Hallows is an A